Religious Right's Hypocrisy: Freedom of Speech Unless You're Pro-Choice - People For the American Way
Skip to main content 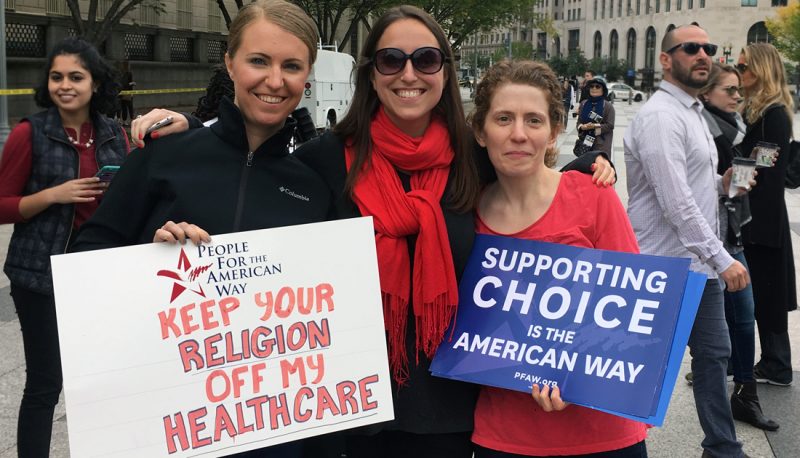 The glaring hypocrisy of the Religious Right has been exposed again.

So-called crisis pregnancy centers, or CPCs, often lie to patients to dissuade them from having an abortion. To address the public health concerns posed by CPCs’ dishonest practices, California enacted the Reproductive FACT Act to require CPCs to inform patients that the state funds free and low-cost reproductive health care, including abortions. Religious Right groups then turned to the U.S. Supreme Court to try to overturn that law in National Institute of Family and Life Advocates v. Becerra, which is expected to be decided by the end of June. As People For the American Way Senior Fellow Peter Montgomery explains in Rewire, the free speech claims made by anti-choice groups in NIFLA are completely at odds with Trump’s new domestic gag rule that removes a requirement that providers give patients information about all pregnancy options and precludes them from referring or supporting abortion as a method of family planning.

Faith & Freedom Coalition founder Ralph Reed calls the new proposed rule “a major victory for the pro-life movement,” but his and other Religious Right groups continue to overlook, or even praise, the parts of Trump’s agenda that are putting the lives of women and children in danger. Trump’s gag rule could effectively cut all Title X federal funds from Planned Parenthood and funnel some of those funds to faith-based organizations, prioritizing the ideological beliefs of the extreme Right over the rights and health of patients. The Right’s false virtue is front and center as anti-choice advocates call for silencing the speech of some in the gag rule but not others in NIFLA.

Groups that see a dire First Amendment threat in requiring the simple posting of a sign giving women information somehow see no problem in a law that literally silences the speech of doctors, nurses, and other health providers by forbidding them from giving women basic information about their health and potential medical treatment.

As the Trump administration plows forward on its extreme anti-choice agenda, it is critical for voters to understand who is facilitating these harmful policies and the hypocrisy behind their arguments.