Barbara “Bobbie” Handman, a former Vice President of PFAW and PFAW Foundation, died on Thursday. For years, Bobbie’s creative energy and fierce commitment to the First Amendment shaped the organizations’ free expression work from New York City, where she was based. Bobbie’s long record of advocacy for free expression and the arts was recognized in 1998 when she received the National Medal of Arts from President Bill Clinton. 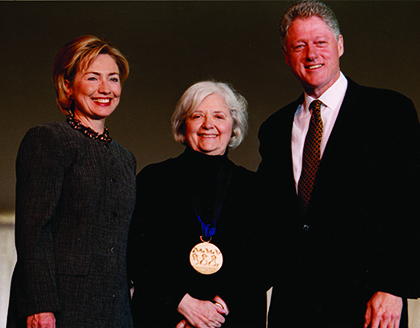 Bobbie’s years at PFAW were part of a long life of political activism. Time after time she responded to would-be censors by rallying well-known actors and writers to participate in public events that affirmed the value of artistic freedom. You can read more about Bobbie’s life and work in the obituary that appears in today’s New York Times. It ends with this quote from Norman Lear: “Bobbie was a lifelong lesson in perseverance. She made New York happen for People For the American Way. And she made everything grander. She dealt in grand.”

People For the American Way extends its heartfelt condolences to Bobbie’s husband Wynn Handman and the rest of their family.