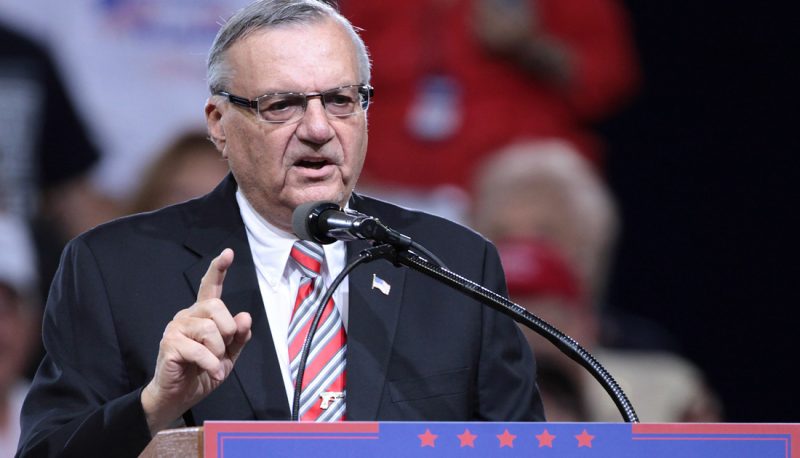 In 2011, a federal judge found that then-Sheriff Joe Arpaio had unconstitutionally targeted Latinos for traffic stops and raids. He was convicted for criminal contempt for refusing to stop and a month later, Trump pardoned him, allowing him to avoid a jail sentence. Now in his Senate run, Arpaio has courted far-right media, including an anti-Semitic publication and the conspiracy theory outlet Infowars.

Kelli Ward is a former Arizona state senator who is now running against Joe Arpaio and others in the Republican primary. Ward, who has been supported by Trump, Steve Bannon, Alex Jones, and far-right funder Robert Mercer, is one of the state legislators who stood with rancher Cliven Bundy in 2014 as he engaged in an armed standoff with federal officials in Nevada.

Omar Navarro’s candidacy has widespread support among the “New Right,” a movement that spun off of the racist alt-right movement but that claims to disavow the current alt-right. He has been affiliated with a range of conspiracy theorists and far-right Trump supporters, including receiving calls from Arizona Senate candidate Joe Arpaio on “a weekly basis.”

Running for the Seat Vacated by Rep. Raúl Labrador in Idaho

Michael Snyder is a Religious Right activist who says that he is running for Congress in order to be Trump’s “best friend in Congress.” On his right-wing website The Economic Collapse, he posts columns about what he sees as an inevitable looming catastrophe and hawks prepper gear.

V.A. Shiva Ayyadurai was one of a few speakers who didn’t drop out of a “free speech” rally in Boston last year that drew tens of thousands of counter-protesters who feared that the event’s lineup would attract white supremacists like the ones who sparked deadly violence in Charlottesville days earlier. He is running as an independent, claiming he was rejected by the state’s Republican Party.

In the mid-2000s, Chris McDaniel hosted a conservative radio program where he blamed gun violence on “hip-hop culture” and called Democrats “the party of sex on demand, the party that supports the homosexual agenda.” In a 2014 Senate run, he happily courted fringe activists with bigoted spokespeople Bryan Fischer and Wayne Allyn Root.

Running in the Republican Primary for Governor in Oklahoma

Former state representative Dan Fisher promises that if he is elected, he will ignore court rulings and criminalize abortion in the state.

Mark Burns, a pastor who was a loyal evangelical supporter of Donald Trump during his 2016 presidential campaign, enthusiastically pushed the narrative that Trump’s campaign was divinely inspired.

Cynthia Dunbar first gained notoriety in 2009, when she led a crusade to rewrite Texas’s textbooks and curriculum to ensure that they reflected the Religious Right’s pseudo-historical narrative about the nation’s Christian founding and purpose. Dunbar is an anti-public school, anti-LGBTQ, and anti-choice activist who insisted that, according to the Bible, the government has no role in helping the poor.

E.W. Jackson is a right-wing pastor, Religious Right activist and radio host who has a well-documented record of making outrageous comments, particularly about LGBTQ people — including declaring that homosexuality “poisons culture, it destroys families, it destroys societies; it brings the judgment of God unlike very few things that we can think of.”

Corey Stewart is an anti-immigrant conspiracy theorist who compared removing Confederate monuments to ISIS atrocities and previously ran for governor on a platform of Confederate nostalgia.

Earlier this year, Paul Nehlen posted a string of anti-Semitic messages on Twitter, losing him the support of the state Republican Party and even much of the fringe right-wing media. Since then he has delved further into anti-Semitism and begun spreading white nationalist memes.