Strengthening Public Education in the Face of Relentless Assaults

Hundreds of teachers, parents, students, school board members and other public education advocates gathered in Raleigh, North Carolina on April 16 and 17  for “And Justice for All: Strengthening Public Education for Each Child,” the third annual conference sponsored by the Network for Public Education and its political advocacy affiliate NPE Action.

The mission of the Network for Public Education is to “protect, preserve, promote, and strengthen public schools and the education of current and future generations of students.” It was founded by education historian and author Diane Ravitch as a way to mobilize supporters of public education in opposition to powerful forces that promote privatization and other “reforms” that undermine public education as a core democratic institution.

Rev. William Barber, who heads the North Carolina NAACP and has because a hero to progressive advocates for his inspirational leadership of the Moral Mondays movement, gave a rousing opening keynote before heading to Washington, D.C. to take part in the Democracy Awakening. Barber said public schools are “where we learn to be a public” and develop a “common civic identity.” But, he said, “racism always gets in the way of us meeting the noble goals of public education.”

“We’ve seen this before,” Barber said of attacks on public education combined with tax cuts for the wealthy. He recounted the history of resistance to Brown v. Board of Education and racial redistricting of school districts, noting that schools are re-segregating in high poverty areas today faster than they did in the 1970s.  He said school reforms that contribute to separate and unequal school systems are “giving in to the vision of Plessy v. Ferguson.”

Among the more than 45 panels and workshops was a conversation with two members of People For the American Way Foundation’s Young Elected Officials Network, State Sen. Dwight Bullard from south Florida, and County Commissioner Jessica Holmes from Wake County, North Carolina, with PFAW Director of Outreach and Partner Engagement Diallo Brooks acting as moderator. 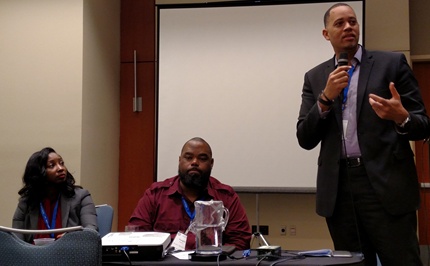 Bullard, the only classroom teacher in the state legislature, said that bad education policies are moving through the legislature for a variety of reasons: some of his fellow legislators are naïve about education policy and some have family and financial ties to charter school operations.  Bullard said that even though the state government has expanded so-called school choice provisions, the “house of cards is falling apart” when it comes to overzealous testing that harms students’ education. He said dissatisfaction with the overuse of high-stakes testing offers opportunities for coalition building, noting that a recent press conference included liberal legislators, members of the teachers union, and Tea Party activists.

Holmes said that she is a first generation college student attributing her success to “amazing, wonderful public school teachers.” She described herself as a reluctant politician, but urged other participants to consider becoming policymakers as a way to make a real difference.  In a state that ranks near the bottom of the scale for teacher pay, she said, she worked to win approval for the largest education budget in her county’s history, while also developing support for early childhood development. Meanwhile, at the state level, millions in tax dollars were diverted to unaccountable private schools through vouchers.

The panelists said that supporters of public education must respond to the amount of money and political influence wielded by privatization advocates with on-the-ground organizing that can provide public officials with both incentive and cover to do the right thing.

Another topic of conversation was the damage caused by the explosion of high-stakes testing and the diversion of educational time and resources to test taking. Speakers argued that testing should be used to identify areas of needed improvement for students, not as simplistic evaluation tools that label students and schools as failing. The “test and punish” approach has set up teachers and schools to be declared failures by implementing high-stakes tests without resources and professional development.

Another keynoter, Seattle teacher and blogger Jesse Hagopian, noted that when Washington state declined to tie teacher evaluation to student test scores, former Education Secretary Arne Duncan revoked a waiver from unrealistic standards under the No Child Left Behind Act. As a result, nearly every school in the state, including some of its best, was classified as “failing.” School officials sent parents a letter required by the federal government informing them that their school was now classified as failing, but included a cover letter explaining that NCLB was “regressive and punitive” and that the designation was bogus.

Among other topics covered at the conference:

A number of speakers denounced HB2, the recently enacted North Carolina law that overturned Charlotte’s nondiscrimination ordinance – and banned localities from passing their own protections against discrimination as well as living wage ordinances.

People For the American Way Foundation board member Bertis Downs is also a member of NPE’s board of directors, said the conference was a “big success” in bringing together advocates from around the country to meet and compare notes with fellow activists. Downs praised the quality of the presentations and the fact that many of the workshops and all of the keynote speeches were livestreamed and are being archived online at www.schoolhouselive.org.