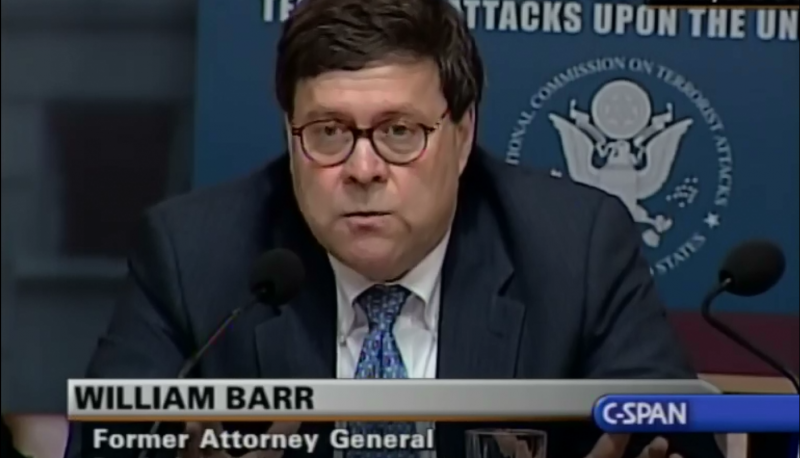 On December 7, President Trump announced his intent to nominate William Barr to be the next attorney general of the United States. People For the American Way immediately set a bright line for the Barr nomination: The next attorney general must be committed to the rule of law and to defending the rights of all Americans. From the Mueller investigation to criminal justice reform, LGBTQ equality, immigrant rights, and reproductive freedom, PFAW and allied organizations have good reason to be concerned about Barr’s ability to pass that test. You can download our letter here.

On behalf of The Leadership Conference on Civil and Human Rights, a coalition of more than 200 national organizations committed to promoting and protecting the civil and human rights of all persons in the United States, and the 74 organizations listed below, we write to express serious concerns about the nomination of William Barr to serve as attorney general of the United States.

As the nation’s top law enforcement officer and leader of the U.S. Department of Justice, the attorney general is responsible for safeguarding our civil and constitutional rights. That is a core and enduring mission of the Justice Department, and the nation needs and deserves an attorney general who is committed to that mission and to our country’s ongoing progress toward equal justice and racial equality. The attorney general must also operate with integrity and independence in service to the people, not the president.

For the past two years, the Justice Department has been led by an attorney general intent on restricting civil and human rights at every turn.1 From rollbacks in voting rights enforcement and LGBTQ rights to a reinvigoration of the “war on drugs” and extreme immigration policies, Attorney General Jeff Sessions used his office to carry out the extreme, anti-civil rights agenda he had advanced for decades in the U.S. Senate. This path of devastation has continued unabated in recent weeks under Acting Attorney General Matthew Whitaker, a hand-picked Trump White House loyalist whose very appointment may be unlawful.2 The Justice Department and the nation need an attorney general who will make a dramatic course correction and begin to enforce our federal civil rights laws with vigor and independence. William Barr is unlikely to do so.

In a recent op-ed, Mr. Barr called Mr. Sessions “an outstanding attorney general” and offered praise for his policies, many of which undermined civil rights.3 But Mr. Barr was completely silent about the one issue for which Mr. Sessions deserves actual praise: his decision to recuse himself from oversight of the investigation into Russia’s interference in the 2016 election. This is a telling indication that Mr. Barr would continue the deeply disturbing anti-civil rights policies and priorities of the past two years. We will continue to review Mr. Barr’s record, but what has been uncovered thus far bears this out. He holds troubling positions on criminal justice reform, LGBTQ equality, immigrant rights, and reproductive freedom.

Justice Reform: As attorney general during the George H.W. Bush administration, Mr. Barr’s draconian approach to law enforcement fostered a system of mass incarceration that disproportionately harmed communities of color across America.4 He endorsed a 1992 Justice Department report entitled “The Case for More Incarceration.”5 More recently, he has been a vocal supporter of harsh mandatory minimum sentences,6 and he has alleged, inaccurately, that the Obama administration’s pro-reform policies “undermined police morale, with the spreading ‘Ferguson effect’ causing officers to shy away from proactive policing out of fear or prosecution.”7 These views are especially troubling at a time when there is overwhelming support from individuals across the political spectrum to reform the justice system.

LGBTQ Equality: Barr holds deeply disturbing views on LGBTQ equality. In a 1995 law review article, he argued for a return to “traditional morality” based on “natural law,” and he criticized a Washington, D.C. law that prohibited Georgetown University from discriminating against LGBTQ student groups whose conduct he called “immoral.”8 Mr. Barr has also advocated against interpreting federal laws to include gender identity,9 a position at odds with the holdings of many federal courts.

Immigrant Rights: Mr. Barr has defended controversial anti-immigrant positions. He expressed support for President Trump’s discriminatory Muslim ban, calling it “squarely within both the president’s constitutional authority and his explicit statutory immigration powers.”10 Multiple federal courts rejected that position and struck down this version of the ban as unconstitutional. In 1992, Barr advocated for the inhumane policy of prohibiting HIV-positive immigrants approved for political asylum from entering the United States.11

The media coverage surrounding the announcement of Mr. Barr’s nomination has thus far focused on his criticism of the Mueller investigation, his troubling suggestion that the FBI should be investigating Hillary Clinton, and his defense of President Trump’s disturbing decisions to fire Acting Attorney General Sally Yates and FBI Director James Comey. And The Washington Post has noted the hypocrisy of Mr. Barr’s criticism of some Mueller prosecutors who have made a handful of political contributions to Democratic candidates, while Mr. Barr himself has made over $500,000 to Republican candidates.13

Precisely because of the serious threats to our democracy posed by concerns about Mr. Barr’s independence, we must be especially vigilant about the implications for his service as attorney general on federal civil rights enforcement. Civil rights must remain a top priority for members of the Senate Judiciary Committee when Mr. Barr comes before them for his confirmation hearing in the new year. Mr. Barr bears the burden of demonstrating he will not continue the civil rights rollbacks we have seen during this administration. In addition, senators must secure assurances that Mr. Barr will recuse himself from the Russia investigation in light of his past comments, in order to prevent an appearance of impropriety.

At a time when the United States has a president who emboldens and enables forces of hate and division in the country; at a time when the Justice Department and the entire administration have embraced an anti-civil rights policy agenda; and when vulnerable communities across this nation are deeply terrified—of profiling, deportation, and even murder—people in America deserve better. They deserve an attorney general who will promote racial equality, vigorously enforce our federal civil rights laws, and fight discriminatory barriers for the most vulnerable among us.

Kavanaugh Has Been Just As Dangerous As We Feared