The Changing Face of the Justice Department 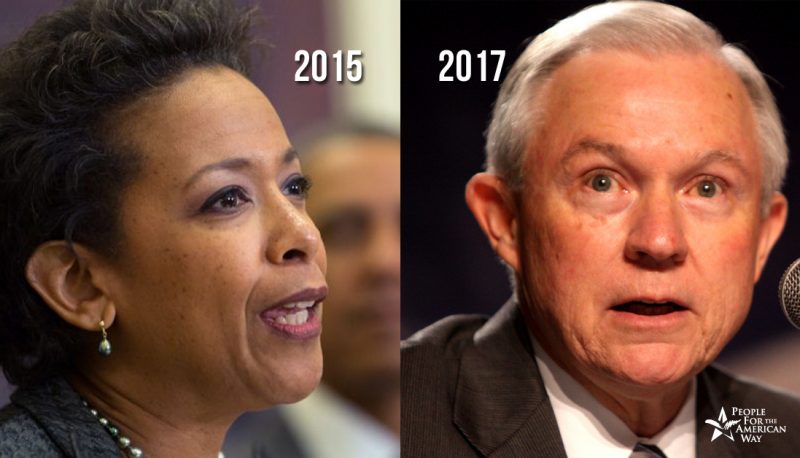 Two years ago this Sunday, on April 23, 2015, Americans celebrated a milestone for diversity and justice when Loretta Lynch was confirmed as the first African American woman to lead the U.S. Department of Justice. Attorneys general play a powerful role in ensuring that America lives up to its responsibilities of liberty and justice for all, and Lynch came to the position with an unquestioned commitment to civil rights and a strong record as a federal prosecutor and private attorney who went after hate crimes, racial discrimination and violence, and the Rwandan genocide. Lynch carried that commitment throughout her tenure at DOJ, working to address racism and religious bigotry, criminal justice reform, and LGBTQ equality.

Loretta Lynch succeeded the first African American attorney general, Eric Holder, who built the Obama Justice Department after a tumultuous eight Bush years. Like Lynch, Holder remained a steadfast civil rights champion despite a barrage of right-wing attacks. Holder defended our democracy against attempts to undermine voting rights, saying after the Supreme Court gutted the Voting Rights Act in 2013: “[T]he Justice Department remains committed to moving forward in a manner that’s consistent with the arc of American history—which has always been a story of increasing equality, inclusion, and access to the franchise. This is what makes the United States of America truly exceptional. And this is what we will zealously guard.”

Now Jeff Sessions has taken the helm at DOJ and put all of that in jeopardy.

Jeff Sessions doesn’t just possess a different perspective than that of Lynch and Holder, as one might expect with a political party change in the presidency—he is their polar opposite. (And even that may be generous.) Thirty years ago, Jeff Sessions was rejected as too extreme for a federal judgeship, after Coretta Scott King warned, “A person who has exhibited so much hostility to the enforcement of [the right to vote], and thus, to the exercise of those rights by Black people should not be elevated to the federal bench.” Sessions’ record has only gotten worse since then—on issues as diverse as criminal justice reform, consumer protection, national security, the environment, immigration, presidential power, voting rights, education, police-community relations, and general civil rights enforcement.

In just two months as attorney general, Jeff Sessions has already taken DOJ in disturbing new directions and signaled many more horrors to come. Sessions’ recent move to review police reform agreements threatens to turn the clock back on what little gains we’ve been able to make toward safe and accountable policing. Sessions is weakening forensic science by not renewing a commission charged with raising standards for its use. Sessions wants to resurrect the war on drugs of the 80s and 90s and further entrench mass incarceration. He is shifting department resources away from other priorities and into an aggressive, hard-line stance on immigration prosecutions and detentions. He abandoned the transgender community when he dropped the federal lawsuit against North Carolina’s HB 2, which is still discriminatory despite its so-called repeal. The list goes on, and we haven’t even covered Sessions’ serious conflicts of interest.

As we mark the second anniversary of the first African American woman attorney general in the history of the United States, it’s what Loretta Lynch and her predecessor, Eric Holder, meant to civil rights that keeps us fighting.

As civil rights legend John Lewis put it prior to Sessions’s confirmation:

We have come a distance. We have made progress, but we are not there yet. There are forces that want to take us back to another place. We don’t want to go back. We want to go forward. As the late A. Phillip Randolph, who was the dean of the March on Washington in 1963 often said, “[O]ur foremothers and forefathers all came to this land in distant ships, but we’re all in the same boat now.”

It doesn’t matter whether Sen. Sessions may smile or how friendly he may be, whether he may speak to you. We need someone who will stand up and speak up and speak out for the people who need help, for people who are being discriminated against. And it doesn’t matter whether they are black or white, Latino, Asian or Native American, whether they are straight or gay, Muslim, Christian or Jews. We all live in the same house, the American house. We need someone as attorney general who is going to look [out] for all of us, not just some of us.