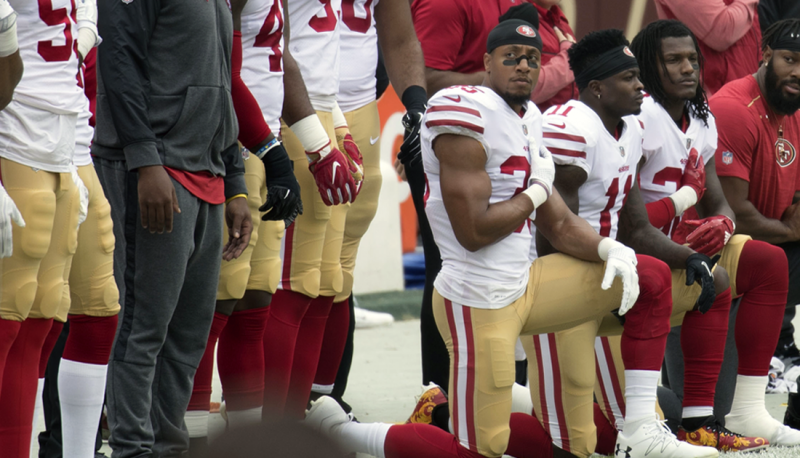 Last year President Trump attacked black athletes for peacefully protesting against police violence during the national anthem at football games. At the same time, Trump was completely silent about the many police shootings of unarmed black people that dominated headlines. He said that NFL owners should fire athletes who take a knee, but never mentioned firing problem police officers.

This week Trump took his indefensible remarks a step further.

As the NFL announced a new policy banning players from kneeling during the national anthem at games, Trump weighed in on the peaceful protests, again questioning the patriotism of the players and even claiming that players who don’t stand for the national anthem “shouldn’t be in the country!” The very same day, we saw the release of another police violence video showing NBA player Sterling Brown of the Milwaukee Bucks being tased and arrested follow a parking violation, despite Brown showing no signs of resistance. This forced the police chief and mayor of Milwaukee to apologize, but Donald Trump still remains silent.

The issue that caused NFL players and others to protest during the nation anthem was—and still is—police violence in the black community and the lack of accountability for it. Unfortunately both the NFL and Donald Trump still don’t understand. Rather than working toward positive change, the NFL and Trump are missing the point and squandering an opportunity to be part of the solution. Instead, they are demonizing black people for peacefully protesting—one of the most fundamental rights we have as Americans.

PFAW’s @DKBrooks45 published this article last September after Trump doubled down on his unacceptable attacks on NFL players — who were using their platform to bring attention to police violence in America. https://t.co/wbliquJvc6 (thread)