The Progressive Happy Hour: Combatting Police Violence Against Communities of Color - People For the American Way
Skip to main content 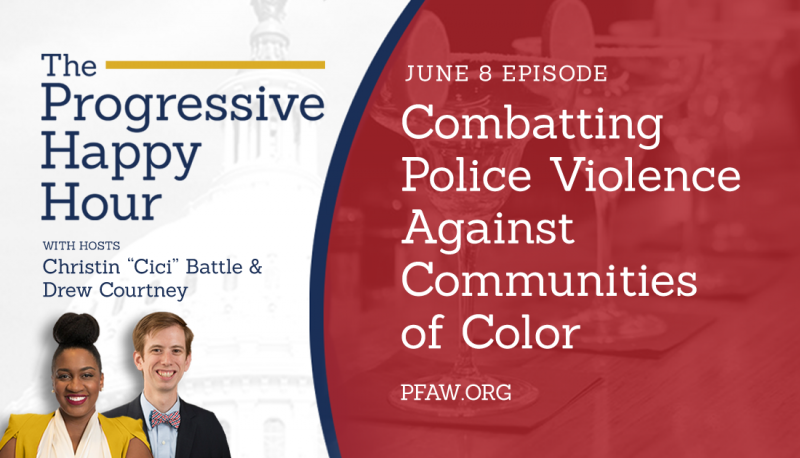 With communities of color enduring one tragedy after another at the hands of police, addressing police violence is an issue that should be a priority for everyone.

In the June 8 episode of “The Progressive Happy Hour,” co-hosts Christin “Cici” Battle and Drew Courtney sat down with Diallo Brooks, PFAW’s senior director of outreach and public engagement, to discuss the urgent need for reform and what activists can do to get engaged.

Diallo talked about the 66 young black elected officials around the country who, through the support of affiliate PFAW Foundation’s Young Elected Officials Network, worked together this Spring to release a national policy agenda on combatting police brutality.

But police violence is not only a policy issue, Diallo noted. Addressing it also means having conversations and educating people in a society where people of different racial and economic backgrounds are often treated vastly differently in police interactions: “There’s a large segment of the population that ignores what happens in policing because their interactions with police are very different. Some of it’s socioeconomic. But [it’s] also if you have never been pulled over and harassed by police, or if you’ve been able to say whatever you wanted to say if you felt a police officer was wrong—and were able to take action without police hitting you over the head or dragging you out of your car in front of your child… But for black folks in this country, we have a long history of over-policing in our community.”

You can read the Young Elected Officials’ letter here.