The Progressive Happy Hour: The Fight for Gun Violence Prevention - People For the American Way
Skip to main content

The Progressive Happy Hour: The Fight for Gun Violence Prevention 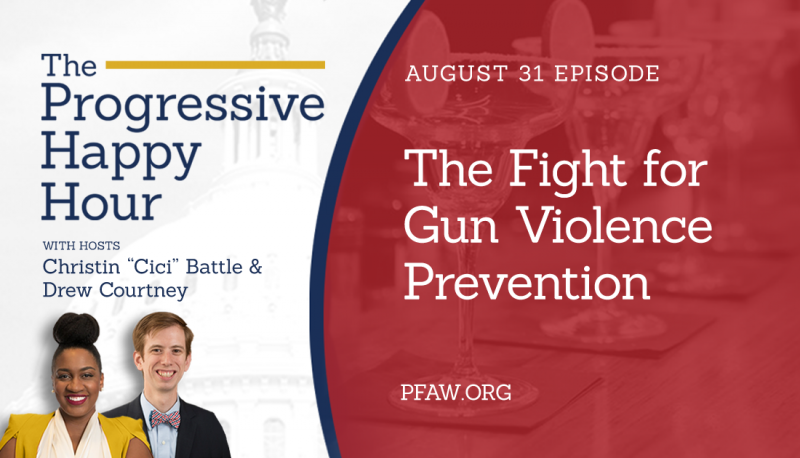 Over the past several years, as deadly mass shootings continue to occur with alarming frequency, gun violence prevention has been hotly debated by our federal and state officials and the general public.

In the August 29 episode of “The Progressive Happy Hour,” co-host Drew Courtney and guest host Diallo Brooks talk to Kris Brown, co-president of the Brady Campaign to Prevent Gun Violence, about the dangerous impact that gun violence has had in the U.S., Supreme Court nominee Brett Kavanaugh’s dangerous stance on guns and how their work has evolved over time.

The Brady Campaign, named in honor of Jim and Sarah Brady, worked with the Bradys to pass the Brady Law, the first comprehensive background check legislation, in 1984. Brown said, “The Brady Law … didn’t happen overnight … It took six years and seven votes in Congress before it was enacted. That law was enacted in a nearly unanimous vote. That meant doing what we do best: uniting people on both sides of the aisle.” But today, as federal lawmaking has become increasingly partisan, changing legislation on guns has resulted in “one in five guns [being] sold without any background check.” The Brady Campaign’s latest work involves ending family fire, or shootings that involve improperly stored guns in the home, which affects eight children daily in the U.S.

Brown also discussed what’s at stake in the fight against gun violence if Brett Kavanaugh is confirmed to the Supreme Court. She shared, “We’re very concerned about Brett Kavanaugh’s nomination and his decisions with respect to the issue of guns. [He] basically has forecasted that any ban on assault weapons will be considered, reviewed and potentially overturned. That’s a big concern because we already know … what he would do: he would rule any kind of ban on assault weapons … unconstitutional.”

Brown stressed how critical it is for activists to vote in the midterms for candidates who support gun violence prevention.  She noted, “The issue of gun violence, I hope, will be a top priority for many, many people as they go to the ballot box in November … This issue is crying out for federal action, and a big part of what we’re doing now is making sure we have a Congress come November that the vast majority of Americans want.”