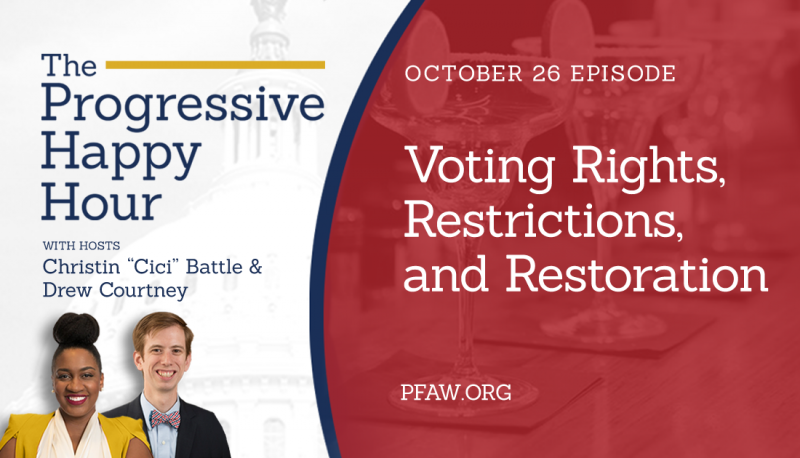 In preparation for the 2018 midterm elections, Republicans in many states (most notably Georgia) have tightened restrictions on voting. Multiple polls and studies indicate that those restrictions disproportionately affect communities of color at the polls, but voter suppression and restrictions are nothing new. From literacy laws and poll taxes to “exact match” laws and restrictions on formerly incarcerated people, voter restrictions have been a source of inequality for centuries.

In the October 26 episode of “The Progressive Happy Hour,” cohosts Cici Battle and Drew Courtney talk to Jen Herrick, senior policy analyst at PFAW, about voter suppression and restrictions, and how a voting restoration ballot initiative on the ballot in Florida could change the state’s politics.

Jen shared that there are several mechanisms in place that restrict voters, particularly after decisions from Supreme Court cases Shelby County v. Holder and Husted v. A. Philip Randolph Institute gutted key provisions of the Voting Rights Act and enabled purging voters from the rolls. She added, “But it’s so many other things, from … not giving folks good options when they don’t have the ID required, cutting back on early voting—including on Sundays, [which impacts] we call ‘souls to the polls,’ proof of citizenship requirements, closing and moving polling places, and cutting back on student voting rights. There are all kinds of suppression and dirty tricks … to try and keep people from the ballot box.”

Florida’s Amendment 4 ballot initiative, which is up for a vote in November, would restore the eligibility to vote to Floridians with past felony convictions. Jen shared the history and development of this restriction to contextualize and underscore its racist implications: “Amendment 4 was designed to fix a problem that goes back 150 years in the Florida state constitution—that’s post-Civil War, when Jim Crow was born … It was a really intentional effort to target freed slaves … to keep them from voting.”

Jen continued, “The impact would be huge if Amendment 4 passed. We’re talking about 1.4 million people.” She added that the Second Chances campaign is advocating for Amendment 4 throughout the state aggressively through phone banks, texts, canvassing, and other actions, with activists like Desmond Meade leading the charge.

In addition to voting for Amendment 4, Jen encouraged progressives in Florida to report last-minute changes in polling places and times and misinformation to 866-OUR-VOTE. Listeners across the country can also spread the word about Amendment 4 in these last days before the midterms by volunteering with the Second Chances call team, following them on Twitter or emailing amendment@pfaw.org.