The Progressive Happy Hour: Who is William Barr? - People For the American Way
Skip to main content

The Progressive Happy Hour: Who is William Barr? 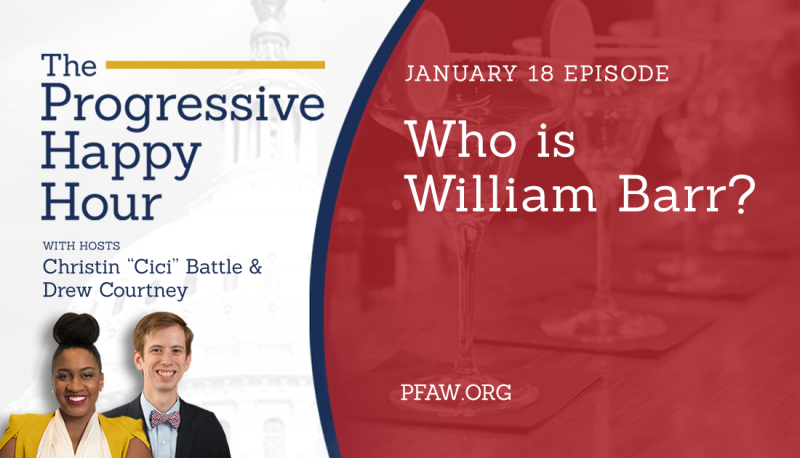 On January 20, Donald Trump will have been in office for two full years, and during that time, the rate of turnover in his administration has been historically high. Among those figures is former Attorney General Jeff Sessions, who Trump forced out last November. The hearing for William Barr, Trump’s nominee to replace Sessions, was held on January 15, and during his questioning, Barr raised a number of red flags about the damage he would likely cause if confirmed.

In the January 18 episode of “The Progressive Happy Hour,” cohosts Cici Battle and Drew Courtney talk to PFAW Senior Legislative Counsel Paul Gordon about Barr’s troubling record and the damage he could cause if confirmed.

Paul explained, “William Barr is a longtime conservative. He used to be Attorney General back when George H. W. Bush was president back in the late ‘80s and early ‘90s.” Paul stressed that during this time, it was Barr who pushed policies that damaged the African American community and communities of color: “He’s a big proponent of the ‘tough on crime’ policies that have been so, so devastating to communities of color these last 30 years.”

In addition to Barr’s alarming record on civil rights, his views on executive power are equally worrisome. “Trump picked [Barr] to protect him from Mueller,” Paul continued. “Trump said that he picked Jeff Sessions originally because he expected Sessions to obstruct the investigation into Russian interference in the election. Sessions didn’t do that, so Trump fired him. We know what his number one criterion is … [Barr] has really scary views on presidential power, and they’re right in line with what Trump wants, which is not being accountable to the rule of law.”

The key takeaway from Barr’s hearing is that “he absolutely refused to say that he would recuse himself from anything having to do with the Mueller investigation …Senator after senator, at least among the Democrats, were asking him  … and he kept saying, ‘I don’t know … I’ll consult with ethics officials; then I’ll make up my own mind.’”

Paul urged listeners to raise their concerns, and offered multiple ways of doing so: “Tell your friends, call your senators … write letters to your local paper … spread the word on social media … and go to our website and get more information about Barr.”