Tracking the Evolution of the Right’s Anti-Immigrant Movement 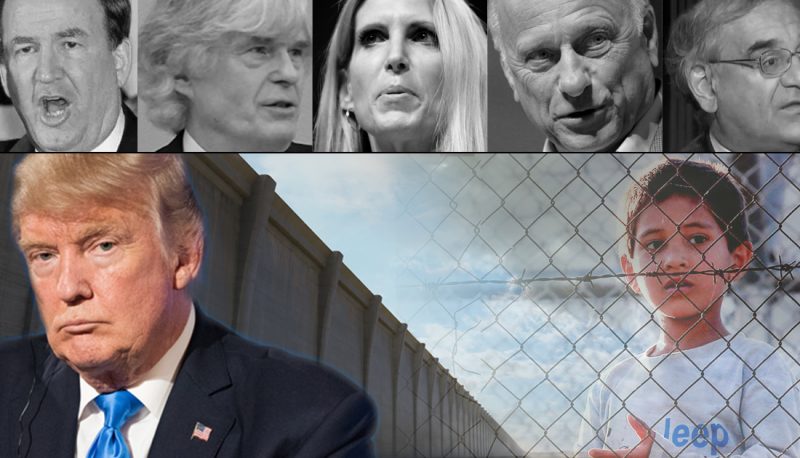 In explaining the disturbing lurch of the GOP towards xenophobia and racism, commenters routinely point to Donald Trump’s entrance into the 2016 election as a key inflection point. But too often Donald Trump is treated as an entirely unprecedented force in American politics who singlehandedly invented anti-immigrant extremism as a political issue. In fact, Trump’s ascendance is the result of a years-long effort by the anti-immigrant movement to move a radical and dangerous view of immigration into the political mainstream. Long before Donald Trump launched his presidential campaign with an attack on Latino immigrants, far-right activists were working to push hostility to immigrants and immigration into the center of the conservative movement and the Republican Party—an effort chronicled and analyzed by People For the American Way’s Right Wing Watch (RWW).

Over the years, Right Wing Watch has repeatedly called attention to the white nationalist roots of the major anti-immigrant organizations that frequently appear in the mainstream media and influence U.S. policymakers, including FAIR, the Center for Immigration Statistics (CIS) and NumbersUSA. And RWW has long followed politicians like Steve King and Kris Kobach, who have fueled anti-immigrant sentiment and policymaking.

In 2005, on the eve of a major bipartisan push for comprehensive immigration reform, CIS’s Mark Krikorian laid out the strategy of “self-deportation”—making life so miserable for immigrants that they choose to leave on their own—which was infamously embraced by presidential candidate Mitt Romney in 2012. Don Feder, a member of FAIR’s board, called for militarizing the border back in 2005; he said troops should be put on the border with “shoot to kill orders” for people trying to enter without documentation.

After anti-immigrant groups derailed comprehensive immigration reform legislation in 2007, RWW documented their celebrations—Rep. Steve King said people were “dancing in the streets.” And we noted that then-Sen. Jeff Sessions spoke to a meeting of FAIR’s board of directors after the defeat of reform efforts.

Also in 2010, RWW published an in-depth analysis of the strategies used by anti-immigration forces during the 2006-2007 campaign. (P)reviewing the Right-Wing Playbook on Immigration Reform identified and examined nine specific strategies right-wing groups used to demonize immigrants, inflame fears, and drive wedges into progressive coalitions. The report, shared widely with immigration advocates and allies in preparation for the next major effort to pass comprehensive reform, included examples of each right-wing tactic and suggestions for dealing with them.

That report quoted an RNC member complaining that for some anti-immigration forces, “anything short of a concentration camp is amnesty”—a right-wing strategy that is still being deployed today, as evidenced by anti-immigration pundit Ann Coulter’s vitriolic responses to any suggestion of compromise by the Trump administration.

In 2011, PFAW followed up with additional reporting, noting that anti-immigrant activists were blaming immigrants for environmental degradation, and RWW published a report analyzing the right-wing playbook on Anti-Muslim extremism, which documented similar demonization tactics and policy goals, including calls to restrict immigration and end birthright citizenship. A 2011 Right Wing Watch in Focus report focused on the people and groups behind the attacks on constitutional citizenship—often referred to as “birthright citizenship”—exposing their strategies and debunking their false arguments.

The Trump campaign’s decision to make inflaming anti-immigrant sentiment a central focus of the campaign was not only in response to Coulter’s 2015 “Adios, America,” but part of a longer right-wing focus. Steve Sailer wrote for white nationalist VDARE in 2000 that the GOP should stop trying to win votes from people of color and focus on white voters.

As PFAW noted in a 2016 report, Peter Brimelow said after the 2008 elections that Republicans should focus on winning white voters, and predicted that Obama will do something “that will start to shock people right away. I think that whites — that is to say, Americans — will organize. … I think immigration will become an issue and it will become an important part of that organization process.”

This connection between anti-black racism and anti-immigrant activism was also reflected by Jared Taylor, publisher of American Renaissance magazine, who said in February 2010, “Perhaps it is because we have a black president, or perhaps because immigration is now spreading from the coasts to every part of the country, but unprecedented numbers of whites are coming out of their coma and beginning to realize where our country is heading.”

In 2013, Pat Buchanan called for a new anti-Latino “southern strategy.” And in 2014, right-wing activist Phyllis Schlafly’s son Roger said that immigration policy “appears designed to repopulate the country with non-whites,” adding that he can’t think of any examples where racial diversity has helped the country—a sentiment recently echoed by Fox News’s Tucker Carlson and his white supremacist fans.

Phyllis Schlafly was an early supporter of Donald Trump; in 2015 she expressed excitement about his calls for mass deportation, saying she was hoping to see “railroad cars full of illegals going south.”

In 2015, PFAW published a report on the Libre initiative, a project funded by the Koch brothers’ network to attract Latinos to its free-market fundamentalist ideology. Libre gives rhetorical support to immigration reform while backing anti-immigrant politicians and attacking advocates for immigration reform.

As the 2016 presidential primaries got into full swing, People For the American Way published an in-depth report on the white nationalist roots of the anti-immigrant lobby, and promoted the report with a column by PFAW President Michael Keegan in Huffington Post, noting that “Donald Trump’s horrifying anti-immigrant message is anything but new.” On the campaign trail, Trump consultants used the idea of a border wall as a mnemonic device to assist Trump in doubling down on the anti-immigrant rhetoric that would appeal to ultra-conservative voters.

Right Wing Watch continues to vigilantly cover the administration’s actions. We pointed out that Trump’s remarks on immigration in his 2018 State of the Union address, which was written by Stephen Miller, sounded like they came straight from activists who have been advocating for severe immigration restrictions. And we tracked and highlighted far-right candidates who ran for office in 2018, including anti-immigration extremists like Arizona’s notorious Sheriff Joe Arpaio.

Anti-immigrant extremism wasn’t created by Donald Trump, and it won’t disappear when he’s defeated. It’s critical that Americans understand the deliberate, organized effort by radical anti-immigrant activists to reshape our country in their own image. Regardless of what damage Donald Trump is able to inflict, these activists will continue to push their destructive message—and PFAW’s Right Wing Watch will be exposing their work every step of the way.