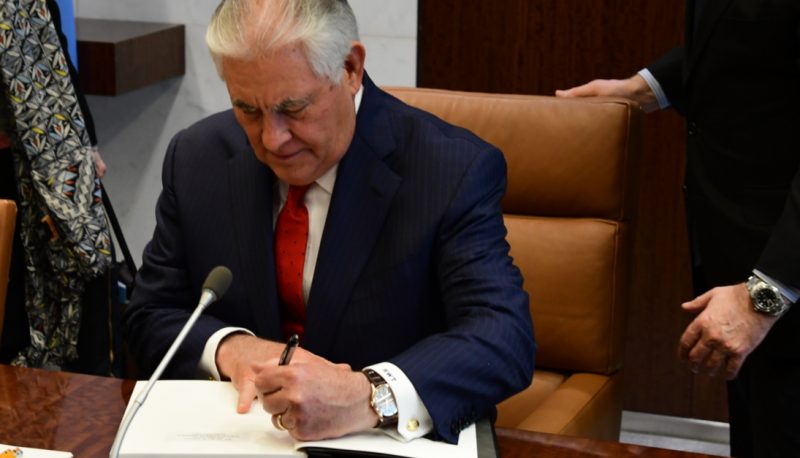 State Department officials working on an annual global human rights report have reportedly been instructed to trim passages on reproductive rights and gender- and race-based discrimination. This latest instance of Trump administration censorship will weaken the report and may embolden certain global actors to regress in their treatment of women. People For the American Way joined more than 170 organizations condemning the Department for shirking its obligation to serve and protect all people, and urging them to immediately reverse course. You can download our February 26 letter, with signers, here.

We are writing to you as human rights, health, and development organizations to raise our deep concern about news that the State Department’s annual Human Rights Report will no longer highlight the full range of abuses and human rights violations experienced most especially by women, girls, LGBTQI people, and other marginalized peoples around the world.

According to State Department spokeswoman Heather Nauert, officials “will sharpen the focus of the report on abuses of internationally recognized human rights and the most egregious issues.” According to media reports, this means removing or dramatically changing the way the U.S. Government reports on women’s and girls’ enjoyment of their rights to health, life, freedom from violence, and a host of other rights, including most especially those related to sexual and reproductive health.

As organizations committed to gender equality and women’s human rights, we see in our work how violations of these internationally-recognized human rights are often among the most frequent and egregious abuses women and girls experience. Gender discrimination is a pernicious societal harm that impacts women’s realization of their human rights in extensive and often irrevocable ways. International human rights authorities have clearly established governments’ human rights obligations in the many ways such discrimination is manifest—from violence against women, to maternal mortality, to restrictions on women’s access to comprehensive reproductive and sexual health. Willful failure to include reporting on these rights violations is a callous disregard both of the abuses experienced by women and girls and of established human rights norms that recognize the government obligations to end them.

As the State Department’s Human Rights Reports have historically shown, human rights are indivisible and universal. Threats to women’s human rights cannot be stricken from the report without sending a broader message to abusive governments that the United States will not hold them to account for such violations. When women’s rights are limited, so are broader pathways to empowerment—economic, social, political, or otherwise.

Erasing content that Foreign Service Officers have worked for months to craft based on their expertise and the contributions of civil society and experts around the world undermines efforts of the United States and, more importantly, human rights defenders in their own countries to promote human rights. Although your spokesperson defends this move as an effort to foster efficiency and decrease duplication from other organizations’ reports, you miss the critical point of having the U.S. Government publish them within the context of an extensive human rights analysis. Editing out the breadth of abuses typically covered by this report weakens its usefulness to put governments on notice to address abuses within their borders, and it may embolden them to regress in the promotion of women’s rights.

The power of this report has been putting the full force of the U.S. Government behind the full human rights agenda, and standing in solidarity with rights-based individuals, organizations, and movements everywhere. Publishing this report without all human rights represented jeopardizes this. It will become an incomplete and inaccurate document that is silent on many of the human rights abuses the United States has previously championed to end.

We call on you to uphold the credibility of this important human rights tool—that so many of our colleagues around the world use to hold governments to account. The rights of all people of all genders to enjoy the full spectrum of rights, without discrimination or government interference cannot be in dispute within your department. Your leadership is needed to immediately intervene and reverse course on this decision.