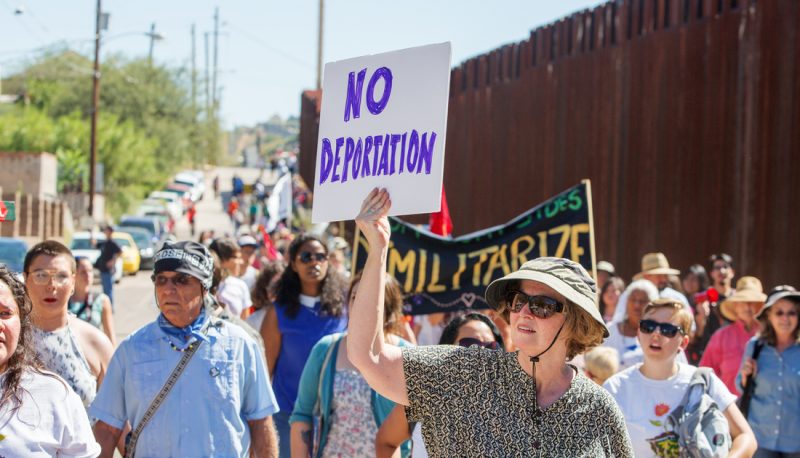 Supporters and veterans protesting deportation policies at the United States and Mexico border on October 08, 2016 in Nogales, AZ, USA. Photo via shutterstock

Trump Sixth Circuit judge Eric Murphy tried to uphold a Bureau of Immigration Affairs (BIA) decision that refused to withhold the deportation of a man who has lived in the U.S. for 20 years, despite strong evidence that he would be persecuted or killed if he returned to Mexico. The Sixth Circuit majority rejected Murphy’s dissent, vacated the BIA order, and sent the case back for rehearing in its May 2020 decision in Guzman-Vazquez v. Barr.

Mexican native Manuel Guzman-Vazquez has lived in the U.S. since 1998. In 2014, immigration authorities sought to deport him, and he applied for  asylum and withholding of removal because of concerns about violence and persecution if he is forced to return to Mexico.

At his hearing before an immigration judge (IJ), Guzman-Vazquez testified that his family faced violence in his hometown, including the murders of both his father and grandfather. After his mother remarried, they moved to another town, where he “suffered mistreatment at the hands of his mother and stepfather.” He testified that his stepfather “regularly subjected him to physical abuse,” including hitting him and whipping and marking his “whole body.” He left home to escape the abuse at age 14.

Guzman-Vazquez explained that he fears returning to Mexico because he is afraid that his stepfather, who “still has connections to the police” and resents him for leaving the family behind, “would kill him.” In addition, he stated that he fears that the people who murdered his father and grandfather would try to kill or injure him, noting that they had murdered his cousin a few months before the hearing.

Although the IJ found that Guzman-Vazquez was “generally credible,” he ruled against him because he did not present any corroborating evidence. The BIA agreed. On a petition for review, the Sixth Circuit vacated the BIA decision in a 2-1 ruling and sent the case back for further proceedings. As the majority explained, the IJ and the BIA made three crucial errors:

Murphy’s dissent supported the BIA’s position, but the majority opinion demonstrated specifically why Murphy was wrong:

As a result of the majority’s ruling, Guzman-Vazquez will have another chance to show that he should not be deported using the correct legal standards concerning his fear of persecution claim. If it had been up to Murphy, however, he would have been deported without such an opportunity.