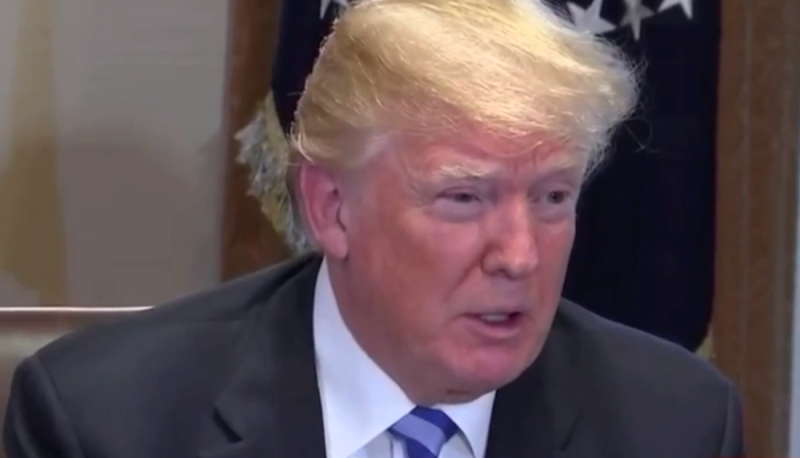 In comments to reporters aboard Air Force One, Donald Trump said that he plans to announce his Supreme Court nominee on July 9th. When questioned, he also said he wasn’t asking any of the candidates about their views on Roe v. Wade.

The president said he was not intending to ask candidates about their positions on Roe v. Wade, the landmark abortion rights decision.

“I’m not going to ask them that question,” he said.

If Donald Trump isn’t explicitly asking nominees about whether or not they’d overturn Roe, it’s because he doesn’t have to. Every candidate on the list was approved by both the Federalist Society and the Heritage Foundation, two right-wing legal organizations deeply committed to overturning the decision both of which have had ample opportunity to make certain they know exactly where each potential nominee stands on the issue. The idea that either organization would recommend a Supreme Court Justice to Donald Trump without an iron-clad understanding, explicit or implicit, that he or she would overturn Roe is laughable.

Trump’s last candidate, Neil Gorsuch, got a lot of mileage out of feigning indignation at the possibility he’d be asked to commit to overturning the ruling recognizing women’s constitutional right to abortion. With his best steely glare he declared “No … I would have walked out the door. That’s not what judges do.” Commentators fawned over his performance, but few of them mentioned that he never mentioned whether he’d ever discussed the issue with anyone associated with the Federalist Society or Heritage, and his answer didn’t give pause to any of the anti-choice groups enthusiastically backing his confirmation.

Let’s not pretend that Donald Trump simply chose these organizations out of thin air. They were specifically chosen to assuage the Religious Right’s anxiety about supporting Trump’s candidacy. The entire point of bringing those groups into the process was to guarantee that his nominee would be rigidly anti-choice.

Trump’s allies are free to pretend that his nominee to the Supreme Court will have an open mind when it comes to abortion, but the rest of us aren’t obligated to believe them.