What’s Missing from the Conversation Over Recent Abortion “Controversies”? The Facts. - People For the American Way
Skip to main content

What’s Missing from the Conversation Over Recent Abortion “Controversies”? The Facts. 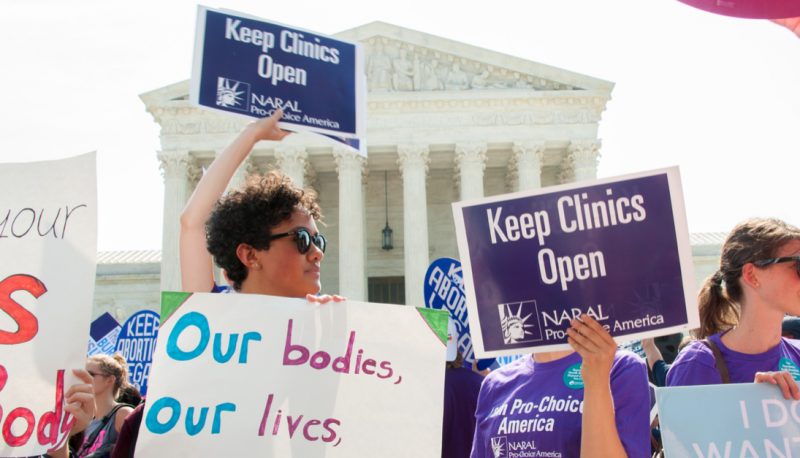 Abortion has been in the news more than usual in 2019 after lawmakers in New York and Virginia made efforts to eliminate outdated, unnecessary and unsafe regulations on abortion later in pregnancy. Then, based on anti-choice propaganda—not science—Republicans voted on Sen. Ben Sasse’s fearmongering and sensationalist bill and Trump tweeted about the nonexistent executing of babies by pro-choice doctors. Unfortunately, too much reporting and subsequent conversations that have followed omit key facts: The proposed policies in New York and Virginia are about catching laws up to what’s actually happening in families, where people routinely have to make difficult decisions about their pregnancies—and (do we have to say it?) infanticide is already illegal.

News media, social media, and policymakers have also failed to mention the hundreds of laws to restrict birth control and abortion access that have been passed over the last 10 years, or Trump’s attempts to roll back health insurance coverage for birth control and access to family planning services. Each of these laws has a devastating effect on people’s lives, and those stories should be at the center of each of these discussions, because that’s how people learn about the complex journey and the multiple barriers people face when they are trying to get abortions.

Republicans and anti-abortion activists have worked at the state and federal level for decades to add as many barriers as possible, resulting in fewer clinics, doctors who are further away, longer wait times, and a host of financial, social and other barriers. There are only four places in the country—Colorado, New Mexico, Maryland and Washington, D.C.—where people can get abortion care later in pregnancy. People who don’t live in those states have to drive or fly across the country, adding additional wait time to already-limited legal timeframes.

Because most Medicaid and other health insurance plans don’t help to cover abortions, financial cost is another common barrier, particularly for low-income people. (Health care is expensive!) For example, in the D.C. region, which has a relatively high number of clinics, it costs about $400 to get an abortion up to 12 weeks—but  40 percent of U.S. adults have reported that they wouldn’t be able to come up with $400 in an emergency. Saving money takes time, but the costs keep growing: 20 weeks into a pregnancy, a person in the D.C. region would need about $2,000. By then, only a small number of clinics near D.C. are equipped to perform the procedure. The cost of an abortion skyrockets the longer a pregnancy progresses, up to a shocking $9,500 or more at 28 weeks. And the cost of the procedure isn’t the only expense to consider: there’s the cost of gas and a hotel, possible missed wages from taking time off from work, and child care expenses.

Social barriers can also play a role. Family members and friends opposed to abortion may try to sabotage a patient’s funding or transportation. Lack of workplace flexibility endangers their only source of income. Young people and sexual assault survivors often face fear, shame and uncertainty, especially in the face of extraordinary misinformation that is often promoted by fake clinics and anti-abortion activists. People who are in jail or detention centers and those who experience homelessness or  intimate partner violence have even fewer resources at their disposal. People in marginalized communities, including trans and nonbinary people, people of color, people who don’t speak English, people with mental illness, and undocumented immigrants, also face health disparities and disproportionate barriers to care.

I know these things because, as a volunteer case manager on the DC Abortion Fund helpline, part of a national network of abortion funds, I have personally spoken with people at the cross sections of all of these scenarios.

It is no mistake that getting an abortion is so hard. The real controversy is the endless barriers to abortion that anti-choice politicians have enacted—and how they subsequently blame those who can’t meet their requirements.

We need to think about abortion in the context of people’s lives, not as fodder for a political debate. We must continue elevating real stories that highlight the nuanced financial, social and other barriers to abortion access, and holding Republican and anti-abortion activists accountable for their damaging policies.