Why Next Week's Election in Virginia is So, So Important - People For the American Way
Skip to main content

Why Next Week’s Election in Virginia is So, So Important

p>Next Tuesday, November 3, Virginia will have its state elections and who votes, how they vote, and the work that goes into mobilizing voters in advance of Election Day are all critically important to 2016.

Virginia is more likely than not to be THE deciding swing state in 2016. So we need to lay the groundwork NOW for victory next year, and that means building voter turnout infrastructure, especially for the Latino vote, in key parts of the state.

A recent analysis from Moody’s Analytics projected that (based on current economic and political indicators), Democrats would win the White House by just 2 electoral votes — which would be the closest margin in U.S. history. Their findings concluded that one state — Virginia — would deliver the election for the Democratic nominee.

There are few states that can change the electoral math more than Virginia, and one of the most important factors is the Latino share of the electorate — a crucial 5% of the vote that will determine who wins and loses in the state.

PFAW is already on the air in Virginia with a Spanish-language ad that’s been getting a lot of press attention – highlighting for Latinos the importance of voting against the party of Donald Trump and its anti-immigrant, anti-working family agenda.

“It’s the first ad that uses Trump to drive Latino voters to the polls, but it won’t be the last. Its focus on women and on two generations, immigrants and first generation, is innovative.”

And it’s not just 2016 that makes Virginia important on the national level. The upcoming 2015 elections for Virginia’s state legislature matter too.

In a recent court filing, Republicans ADMITTED that the GOP intentionally rigged the state’s congressional districts in order to produce a delegation heavily tilted their way.

It’s the Republican state legislature that has made Virginia one of the most gerrymandered states in the country. In 2012, President Obama won Virginia narrowly, but Republicans still picked up 8 of the state’s 11 congressional seats under the GOP-friendly maps drawn by the state legislature.

Now, party control of the state legislature is up for grabs.

If we can flip control of the State Senate away from right-wing Republicans, it will be a MAJOR DEFEAT for the Radical Right in what was once one of their most reliable strongholds!

Virginia not only housed the capital of the old Confederacy, it's the home of Pat Robertson and Jerry Falwell, the Founding Fathers of the modern radical Religious Right — as well as the foundational institutions of the movement they created, like Robertson's Regent University and Falwell's Liberty University.

It's so sweetly fitting that People For the American Way — the organization founded to counter their hate that was a constant thorn in their sides — would be instrumental in finally turning what was once their deep red home state solid blue. 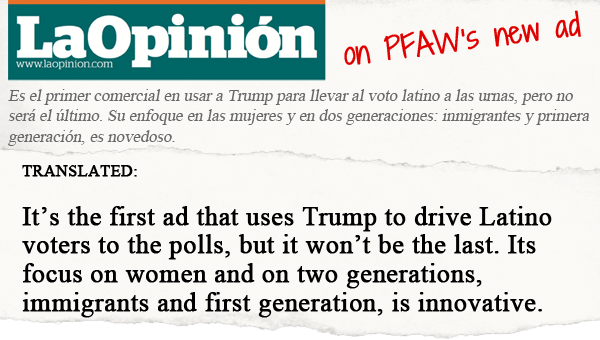 Virginia is an Early Opportunity to Tarnish the GOP Brand

This year’s fight for control of the State Senate in Virginia has emerged as an excellent opportunity to engage Virginia’s Latino community and to further attach the extreme rhetoric and policies of the Republican Presidential candidates to the overall GOP brand. Targeting the Northern Virginia area, with its large Latino population, we’ll have an impact in the Senate District 29 race — which is likely to determine party control of the state Senate. It will also allow us to connect with the Latino community and deepen the association of radical, anti-immigrant sentiment with the Republican Party at the local, state, and national level.

Building on our previous work and refining it ahead of 2016, PFAW’s 2015 plans include:

Not only will these efforts boost Latino turnout in 2015, they will further damage the Republican brand with Latinos and help increase civic participation — boosting the “muscle memory” of voting ahead of 2016. 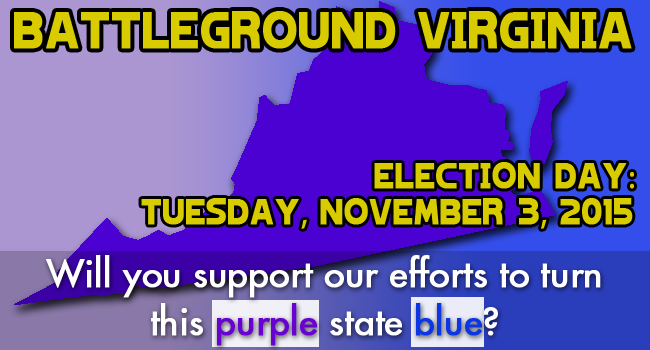 People For the American Way has a demonstrated record of mobilizing Latino voters, especially in Virginia, where our Latinos Vote! campaign has been active since 2012. That year, we made a full investment in Virginia and built a comprehensive program of outreach to the Latino community through TV, radio, digital, and direct mail. In the 2013 Governor’s race, we worked hand-in-hand with the McAuliffe campaign to secure victory over Tea Party darling Ken Cuccinelli and in 2014, we ran targeted digital ads to help secure Senator Warner’s re-election. In each of these races the Latino vote proved decisive in the Democratic candidates’ success. 2015 presents an excellent opportunity to continue to engage the Latino community and to further build the overall narrative about the dangerous policies and ideology that Republican candidates hold.

Is this a plan you can support? If so, please help PFAW fund this work with a donation today>>