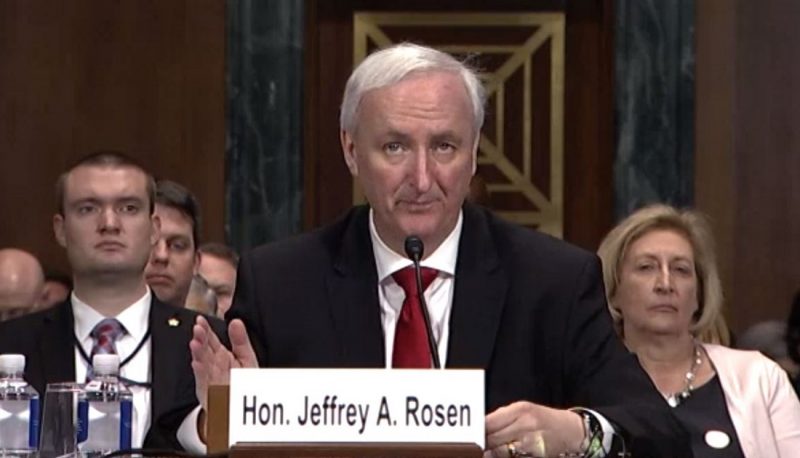 Trump’s DOJ Nominee is Mum on Brown v. Board of Education

On March 26, President Trump nominated Jeffrey Rosen to serve as deputy attorney general under William Barr at the Department of Justice. The Senate Judiciary Committee held Rosen’s hearing on April 10. Rosen now awaits a committee vote expected on May 9. People For the American Way wrote to committee members to express our opposition to his nomination. You can download our letter here.

On behalf of our 1.5 million supporters nationwide, People For the American Way opposes the nomination of Jeffrey Rosen to be Deputy Attorney General of the United States. At a time when the rule of law is under threat from the administration itself, the Senate cannot simply defer to President Trump or Attorney General Barr’s choice to serve as DAG. Instead, the Senate has an obligation to hold the executive branch to a higher standard than the president and attorney general are willing to hold themselves to.

Rosen’s nomination cannot be considered without regard to the individual who recommended him to the president, and who Rosen would directly serve: Attorney General William Barr.i Like many other organizations committed to the rule of law, People For the American Way opposed Barr’s nomination to his current position, based in part on the evidence that he would abuse his position to protect President Trump from the consequences of Special Counsel Mueller’s investigation.ii Unfortunately, that is exactly what Barr has done as attorney general, generating intense criticism.

People who had publicly urged Americans to give then-nominee Barr the benefit of the doubt have realized their error. For instance, Benjamin Wittes has written:

I took a lot of criticism for these pieces—particularly the second one, in which I specifically said we should evaluate Barr’s actual performance in regard to releasing the Mueller report, and thus wait for him to act, rather than denouncing him preemptively.

Barr has now acted, and we can now evaluate his actual, rather than his hypothesized, performance.

It has been catastrophic. Not in my memory has a sitting attorney general more diminished the credibility of his department on any subject. It is a kind of trope of political opposition in every administration that the attorney general—whoever he or she is—is politicizing the Justice Department and acting as a defense lawyer for the president. In this case it is true.iii

Barr’s public description and pre-release framing of the report’s findings was so misleading that Mueller himself sent him a letter of protest.iv Barr’s obstruction of the House Judiciary Committee’s efforts to see the unredacted report is expected to lead the committee and perhaps the full House to find him in contempt of Congress.v Indeed, the entire administration is engaging in massive resistance to congressional oversight, choosing to simply ignore clearly legitimate and lawful document requests, apparently with Barr’s approval.

We can presume that Barr has chosen Rosen to be a collaborator in his work. Unfortunately, Rosen has provided no reason to think otherwise.

Rosen has been the deputy secretary of the Department of Transportation since the spring of 2017. In the Bush administration, he was DOT’s general counsel, as well as OMB’s general counsel and senior policy advisor. He played an important role during both administrations in efforts to weaken environmental protections in ways that would benefit corporate interests.

For instance, when the Bush-era EPA sent OMB a finding that carbon dioxide emissions threatens the public’s health and welfare, OMB staff reportedly “refused to open it, and it sat in limbo for months.”vi And when the Trump administration sought to weaken vehicle fuel efficiency and emissions standards, there were credible reports of substantial scientific inaccuracies and faulty assumptions. As reported in The Atlantic:

In some cases, the mistakes are so large—and so central to the rule’s legal justification—that remedying them may destabilize the entire argument for the proposal. Public documents also make it clear that the Trump administration knew about some of the errors before the rollback was published.vii

Because the Senate cannot responsibly confirm a deputy attorney general without first discerning his character, his competence, and his policies, several committee members have asked Rosen about his role in these controversial actions.

However, rather than respond cooperatively, he claims that his record as a senior-level official in two presidential administrations is irrelevant. In his answers to committee members’ written questions for the record, he refuses over and over again to provide any information. More than 30 times, he gives the following non-response or a variant thereof:

Any details about the rulemaking [or meetings] relate to oversight of the Department of Transportation, and not to the role I would have at the Department of Justice. In view of your interest in this issue, I will be pleased to refer your inquiry to DOT’s Office of Government Affairs.viii

Such a flippant response to a committee of the United States Senate does not inspire confidence. Instead, it should inspire among senators a vote against confirmation.

What’s At Stake with the Supreme Court: Threats to Public Health and the Environment