Senator Chuck Grassley’s (R-IA) refusal to hold a hearing on President Obama’s nomination of Judge Merrick Garland to the Supreme Court highlights a pattern of inaction apparent throughout his leadership of the Senate Judiciary Committee.

Grassley’s refusal to do his job goes well beyond his partisan blockade of a qualified nominee to our nation’s highest court. A complete look at his 16-month tenure as Judiciary Committee chairman reveals a pattern of obstruction in service to partisan interests.

Under Chuck Grassley Judicial Confirmations Are Proceeding at a Glacial Pace

The responsibilities of a Senate committee chairman extend beyond the hearing room. It is his or her job to guide confirmations through the committee and onto the floor for consideration by the full Senate.

Looking at the data, it becomes obvious that Chuck Grassley’s refusal to do his job goes beyond his Supreme Court obstruction and extends to blocking appellate and district court nominees as well.

The current Senate’s record is particularly dim on judicial confirmations. Obama has seen 17 lifetime judges confirmed in the past 16 months, compared to 45 for Bush in the same time frame, 40 for Clinton, and a whopping 82 for George H.W. Bush (including Justice Clarence Thomas). [Washington Post, May 5, 2016]

A comparison of Grassley’s tenure under President Obama to Patrick Leahy’s (D-VT), who served as chairman during the last two years of the Bush administration, is striking. 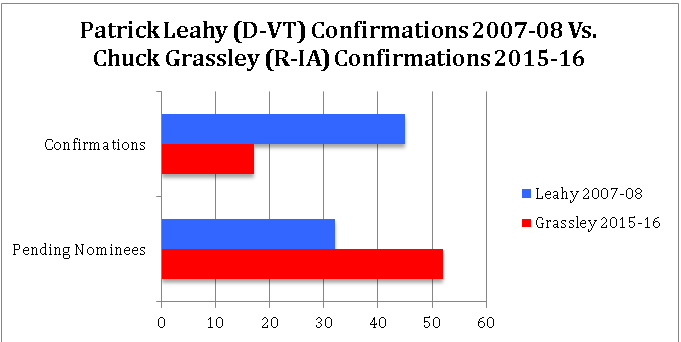 By the end of April 2008, Leahy had worked to confirm 45 judges with only 32 nominations remaining before the Senate. Three of these pending nominees had already cleared the committee and four had already received committee hearings. This means that no action had been taken on just 25 nominations.

During the comparable time period between January 2015 and April of this year, Grassley has only managed to confirm 17 nominees, barely a third the number of Patrick Leahy under George W. Bush. 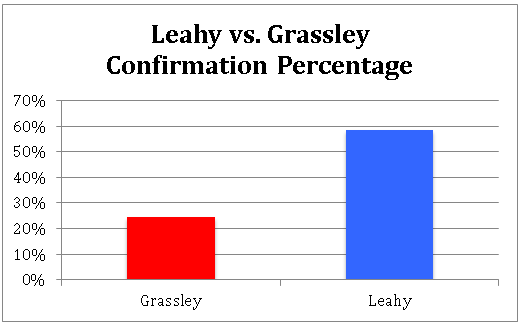 Fifty-two of President Obama’s judicial appointments are still pending. Of these, 12 have cleared the committee, and hearings have been held for an additional 6, leaving 33 with no action having been taken.

The day Chuck Grassley was sworn in as chairman, President Obama’s nomination of Loretta Lynch was still pending before the Senate. This was after Republicans demanded she not be confirmed during the lame duck session following the 2014 election with control of the chamber due to switch from Democratic to Republican. Confirming the nation’s top law enforcement official should have been a top priority for the committee. Yet it was another 100 days before Lynch would take her place at the Department of Justice.

In comparison, the seven attorneys general prior to Lynch were all confirmed within one month.

Lynch cleared the Judiciary Committee at the end of February, more than a month after Grassley took over the committee, an extraordinary amount of time considering the speed with which the previous seven attorneys general were confirmed. As chairman, Grassley was responsible for the floor vote on this confirmation. As in the case of current Supreme Court nominee Merrick Garland, Grassley and Majority Leader Mitch McConnell (R-KY) allowed pure partisanship to stall a critical appointment.

The 2016 election will be the first presidential election in more than 50 years without the full strength of the landmark Voting Rights Act to protect against voting discrimination. Nearly three years after the Supreme Court gutted the law in its 2013 decision in Shelby County v. Holder, Grassley has done nothing to restore the VRA – not even schedule a hearing – despite widespread evidence of voters being disenfranchised across the country as new state laws and local election practices make it harder to register, to vote, and to have those votes counted.

Already this year, thousands of primary voters in Arizona, North Carolina and other places that lost protections due to Shelby County have suffered voting discrimination – a canary in the coalmine for what could happen in the November general election. It is the responsibility of the Judiciary Committee to—at the very least—hold hearings on restoring the protections previously guaranteed by this critical law. Since taking over the committee, Chuck Grassley has not held a single hearing on the topic.

This abdication of responsibilities is yet another example of Grassley failing to do his job as chairman of the Senate Judiciary Committee.

Chuck Grassley’s 16 months at the helm of the Senate Judiciary Committee have been marred by partisan games that have led to one of the least productive sessions for the Judiciary Committee in decades. While attention has focused on Grassley and McConnell’s refusal to take action on President Obama’s nomination of Merrick Garland to the Supreme Court, the totality of the committee’s record demonstrates a failure to do its most basic job.

Judicial confirmations have proceeded at an unprecedentedly slow pace. Grassley’s tenure has also been tarnished by the embarrassingly slow confirmation of Loretta Lynch and its failure to address changes to the Voting Rights Act.

Polling indicates voters across the country are tired of Republican senators on the Judiciary Committee putting partisanship above patriotism and failing to do their jobs. The recent obstruction of Merrick Garland is a symptom of a larger problem that lies at the feet of the committee’s chairman, Chuck Grassley.