Contact: Drew Courtney at People For the American Way

In response to a Freedom of Information Act request from People For the American Way’s Right Wing Watch, the Federal Bureau of Investigation has been unable to produce records corroborating the claims by Attorney General Jeff Sessions’ staff that the FBI instructed Sessions not to list certain contacts with Russian officials on his SF-86 security clearance form. In fact, the FBI provided Right Wing Watch (RWW) with an email from an FBI employee saying that he or she “did not recall” any such conversation with Sessions or his staff.

Right Wing Watch asked the FBI for all records relating to instructions the bureau had given Sessions “concerning what contacts with foreign individuals to list on or to omit from his SF-86 or other security clearance form” and, for a point of comparison, made an identical request regarding instructions given to then-Rep. Tom Price, who was nominated to be secretary of Health and Human Services. People For the American Way, represented by People For the American Way Foundation and American Oversight, sued the FBI for release of the documents in September.

Sessions indicated on his SF-86, which he completed in November 2016, that he had not had any contacts with foreign government officials in the previous seven years. A Justice Department spokesman stated in May, after news reports had revealed that Sessions had met multiple times with Russian ambassador Sergey Kislyak while campaigning for President Trump, that Sessions’ staff “consulted with those familiar with the process, as well as the FBI investigator handling the background check, and was instructed not to list meetings with foreign dignitaries and their staff connected with his Senate activities.”

In a response on Thursday to RWW’s request, the FBI provided a single, internal email dated March 7, 2017 detailing a phone call the previous day from Peggi Hanrahan, an aide to Sessions who had previously worked in his Senate office. Hanrahan, according to the email, had called an FBI employee to inquire “whether or not she previously asked [the employee] if Senator Sessions needed to list foreign contacts on his SF-86 while on official government business when his background investigation was being conducted in December 2016.” The FBI employee told Hanrahan, according to the email, that the FBI employee “did not recall” such a conversation, “but that for the purposes of the SF-86, [Sessions] was not required to list foreign government contacts while on official government business unless he developed personal relationships from such contacts.” 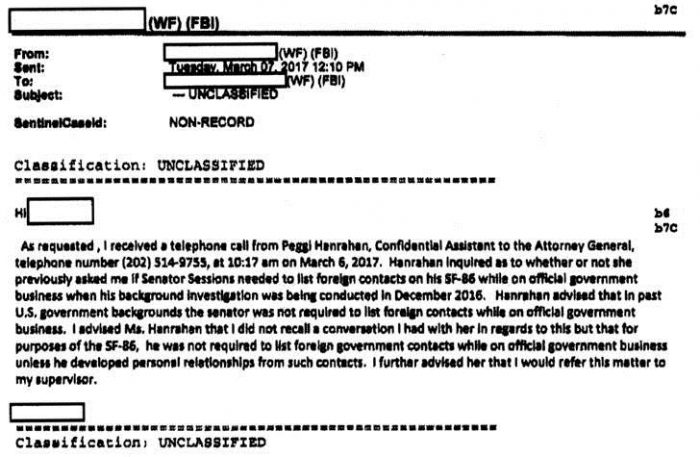 The March 6 call from Hanrahan seeking corroboration for Sessions’ claims came on the same day on which Sessions wrote a letter to the Senate Judiciary Committee defending his statement during the confirmation hearing that he had not had contacts with Russian officials during the campaign.

The FBI indicated that the single March 2017 email was its final response to RWW’s request for any records related to any instructions given to Sessions regarding his SF-86, and in the accompanying cover letter, the bureau stated that it was not withholding any other documents.

The FBI separately stated that it had no records responsive to RWW’s identical request for instructions to Price.

“This document raises more questions than it answers,” said Elliot Mincberg, senior fellow at People For the American Way. “If the FBI did not tell Sessions in 2016 to omit the conversations with Kislyak from his security clearance form, who did? Does the FBI think that Sessions’ conversations with Kislyak, at which he reportedly discussed campaign-related matters, were ‘official government business’? Did he cross the line into developing ‘personal relationships from such contacts’? Why did Sessions’ staff wait until Sessions was already confirmed to his position and facing criticism for his contradictory answers on these meetings to ask the FBI for this information? Sessions has been unwilling to provide clear answers on the extent and content of his contacts with Russian government officials during the presidential campaign, and this document does nothing to dispel that impression.”

“After getting caught lying to Congress and the FBI, Jeff Sessions asked us to take him at his word that the FBI instructed him to do it,” said Austin Evers, Executive Director of American Oversight. “We now have clear evidence that the FBI has no records that would support Sessions’ claims, and it is long past time for him to simply tell the truth about his Russian contacts.”

People For the American Way is a progressive advocacy organization founded to fight right-wing extremism and defend constitutional values including free expression, religious liberty, equal justice under the law, and the right to meaningfully participate in our democracy.

American Oversight is a non-partisan, nonprofit ethics watchdog committed to holding the government accountable. With congressional oversight lacking, American Oversight is stepping in to uncover and publicize information about malfeasance and corruption by administration officials. Follow us at @weareoversight and learn more at http://www.americanoversight.org.