Contact: Layne Amerikaner or Laura Epstein at People For the American Way

Three months into the 114th Congress, it's a good time to take stock of how the newly-Republican Senate is doing when it comes to processing circuit and district court judicial nominations. While they are rightly being criticized for the interminable delay in voting to confirm Loretta Lynch as Attorney General, they have also abdicated responsibility for confirming judges, having confirmed a grand total of zero so far. As they head home for a two-week break, Senate Republicans have made it clear that they have no interest in governing responsibly.

A useful basis of comparison is George W. Bush’s final two years in office, when his judicial nominees were considered by a newly-Democratic Senate.  In 2007, the Judiciary Committee under Chairman Patrick Leahy hit the ground running.  There were numerous nominees from the previous Congress approved by the GOP-controlled Judiciary Committee but left unconfirmed at the end of 2006.  Rather than force them into new hearings for the benefit of the new committee members, Chairman Leahy arranged for quick votes instead.  The Committee also processed several first-time nominees.  As a result, by end of March 2007, the Senate had confirmed 15 new judges.

The Senate ended up confirming a total of 68 circuit and district court judges during that two-year period.  The chart below shows how today’s Republican-controlled Senate compares to the Democratic-controlled Senate of Bush’s last two years, and the pace of confirmations they will be compared to this year and next. 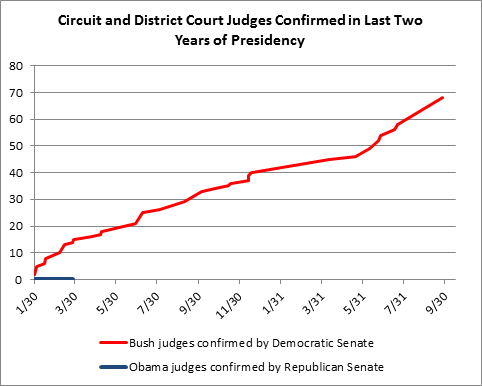 Another way of contrasting how seriously the Democrats took their job in 2007-2008 vs. the attitude of Republicans today is to track the number of vacancies.  Judicial vacancies open regularly and predictably, since judges usually announce their intent to retire or go into semi-retirement up to a year in advance.  Just to keep the number of vacancies even requires that several new judges be confirmed each month.

Today, in stark contrast, the number of vacancies is climbing steadily, from 40 at the beginning of the year to 51 today. 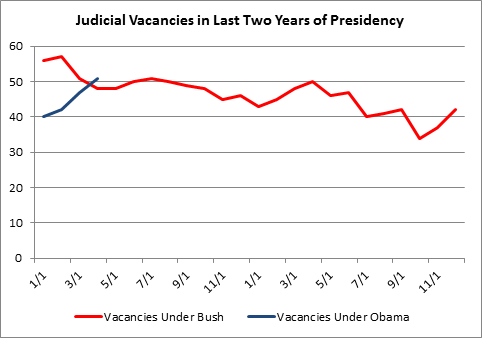 We see the same thing with judicial emergencies, which have skyrocketed from 12 at the beginning of the year to 23 today.  As the chart below shows, Democrats in the Senate during Bush’s last two years did not allow the number of judicial emergencies to increase like that, and in fact the number generally remained steady or decreased during most of the two-year time. 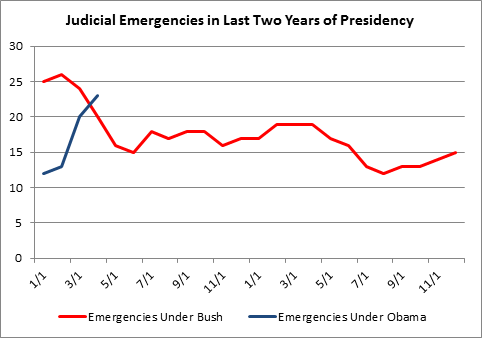 Majority Leader McConnell and Judiciary Committee Chairman Grassley have their work cut out for them if they want to reduce the number of judicial vacancies and emergencies.  It should not be difficult to do, if they take governance seriously.