So far, 2014 has been a banner year for effectively pushing back against the Republican obstruction of judicial nominees that we have seen since the moment Barack Obama took office. The past few months have shown just how much progress America can make in ending the deliberate sabotage of the third branch of government so that our nation’s federal court system can do what the Founders intended it to do: Protect every person’s rights and ensure that everyone can have their day in court.

Since the day that George W. Bush left office, Republicans have sought to leave as many judgeships as possible vacant for as long as possible, apparently in the hopes of maximizing the next (Republican) president’s opportunities to nominate his or her own judges and impose a right-wing ideology on America’s federal courts. With that goal they have simply blocked confirmation votes, regardless of the nominee. The result has been long backlogs in courts across the country and serious delay in providing justice for many Americans.

Under Senate rules, unanimous consent is needed to schedule a confirmation vote for a judicial nominee – something that used to be regularly granted to nominees with strong bipartisan support, as most lower court judges have had. But for the first time, Republicans under President Obama have routinely refused to allow timely votes on nearly every nominee – even the vast majority who have little or no Republican opposition – effectively but invisibly filibustering just about every one of them. Only after months of delay would Republicans finally consent to a vote. In all other cases, the only way to break the logjam has been for Democrats to file a cloture motion to end the filibuster, a burdensome and time-consuming practice, and (until recently) one requiring a supermajority of 60 votes. So for the first five years of the Obama presidency, confirmations were regularly delayed for no reason, usually out of public view, for months longer than necessary. For instance, Richard Taranto was confirmed to the Federal Circuit unanimously, but the Senate was not allowed to hold a vote until 347 days after his committee approval; Republicans never publicly explained why they would not allow him a vote earlier.

This year, things have changed. By late 2013, five years of unprecedented obstruction had climaxed in a declaration by GOP senators that they would filibuster any nominee for the critically important and understaffed District of Columbia Circuit Court of Appeals, no matter who the nominee might be, Senate Democrats concluded that the Senate and the nation would be significantly damaged if this were allowed to continue. The chamber responded to the exceptional obstruction by reforming its procedural rules. Going forward, cloture votes to end filibusters of executive and judicial nominees (with the exception of those to the Supreme Court) would require a majority of senators voting, rather than 60 votes.

Now, when Republicans refuse to consent to a vote, Majority Leader Reid files a cloture petition and sets a vote. Taking advantage of the change in Senate rules, Democrats have been able to defeat the GOP filibusters with a simple majority vote. While Republicans have not consented to even one judicial confirmation vote in 2014, they also have not been able to stop the Senate from voting on any of them. And despite the significant time that Republicans force the Senate to spend on each confirmation – drawn-out roll-call cloture votes, post-cloture time for debate of 30 hours for circuit court nominees and two hours for district court nominees (a debate that usually does not occur despite the time set aside for it), then time-consuming roll-call confirmation votes – Reid and the Democrats have persevered. Rather than wait for months longer than needed after committee approval before having a floor vote, the Senate has been able to act in a more timely – and appropriate – manner.

One of the basic and most important responsibilities of the U.S. Senate under the Constitution is to vote whether to confirm judges and keep the federal judiciary functioning. As of 2014, the Senate has no longer been blocked from doing that.

The figure below shows the dramatic drop in how long the average nominee has had to wait for a confirmation vote after approval by the Judiciary Committee as a result of the rules change: 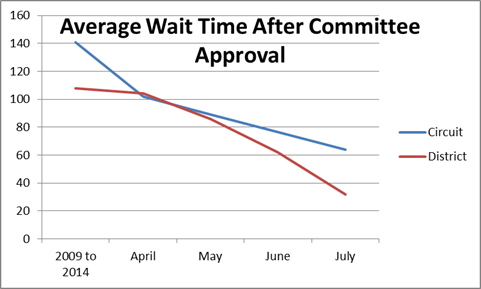 With the Senate freed to do its job, the number of confirmation votes has grown significantly. 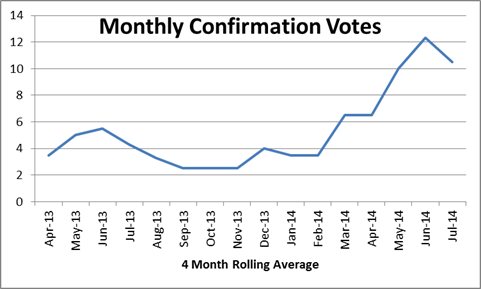 This has ameliorated the intentionally generated vacancy crisis that has hobbled our courts since President Obama took office. There were 54 vacancies when Obama was inaugurated in 2009. With the Senate blocked from holding timely confirmation votes, that number went to historic highs, skyrocketing to 100 by the end of the year. When the 111th Congress ended in December of 2010, Republicans blocked confirmation votes for 19 qualified nominees who had been approved by the Judiciary Committee, the overwhelming majority of whom had been approved unanimously or with almost unanimous support. As a result, 2011 opened with 95 vacancies – and with a needless bottleneck of nominations that delayed confirmation votes for all nominees down the line. With Republicans preventing the Senate from confirming even consensus nominees, it counted as a major accomplishment if the number of vacancies dipped into the low 80s, or even the 70s, as it sometimes did.

As a result, at the beginning of this year, our federal court system was suffering from 92 vacancies. And now? As of September 21, we’re down to 57 circuit and district court vacancies, just a few more than when Obama took office. This is a dramatic and long overdue drop.

Supreme Court and Circuit Courts:
Undoing the Damage of the Bush Years

Our Constitution and our laws protect our right to vote, to have a workplace free of discrimination, to get married, to make our own reproductive decisions, to hold corporations accountable when they unlawfully injure or cheat us, and to have a voice in our democracy. But those rights don’t mean anything if we don’t have effective courts – and judges – to vindicate them when they are impinged.

Knowing the important role federal courts play in shaping our laws and guaranteeing – or frustrating – our basic rights, President Bush and his supporters set out to put as many far right ideologues on the federal appellate courts as possible. The most controversial of his court nominees are busy re-making law across the land.

Most notoriously, John Roberts and Samuel Alito have joined with Reagan and Bush-41 nominees Antonin Scalia, Clarence Thomas, and Anthony Kennedy to give hard-right ideologues a frequent 5-4 majority on the Supreme Court. They have regularly bent the law and confounded logic in order to rule in favor of the powerful in case after the case, rewriting our Constitution and federal laws. Citizens United, Shelby County, and Hobby Lobby are just a few of the growing number of cases where they have used the federal bench as a platform to transform the country to fit their personal political ideologies, notwithstanding what the Constitution and our laws actually say.

While the Supreme Court is extremely important and well known, it only hears around 75 cases a year. Most Americans in federal courts have their cases decided at the district or circuit level. Circuit court rulings have an enormous impact on the law, and only a tiny portion of them are reconsidered at the Supreme Court. That is why George W. Bush and his partisans spent so much effort to confirm ideologues like Janice Rogers Brown, who now holds a lifetime position on the D.C. Circuit. She wrote a 2012 opinion holding that graphic warnings on cigarette packages violate the tobacco companies’ free speech rights. She joined a 2013 opinion striking down a National Labor Relations Board rule requiring employers to post workers’ legal rights, framing it as “compelled speech” indistinguishable from forcing schoolchildren to say the Pledge of Allegiance or requiring drivers to display a political message (Live Free or Die) on their license plates. She even defended the ideology of the discredited Lochner era in a 2012 concurrence, writing that courts’ deference to everyday economic and business regulations “means property is at the mercy of the pillagers.”

In contrast to ideologues like Brown, President Obama has named judges characterized by their fidelity to the Constitution and our laws, and the impact on ordinary Americans has been enormous. For instance, the full D.C. Circuit, which now has four Obama nominees among its eleven active judges, this month vacated a widely criticized panel ruling by two conservative judges striking down a key subsidies provision of the Affordable Care Act. The legal argument against the subsidies has been widely recognized as weak, with a transparently political motive. On the same day of the DC Circuit’s panel ruling, a unanimous panel of the Fourth Circuit had upheld the law. Obama nominee Andre Davis accurately described what the far right plaintiffs are seeking judicial allies to do:

[They want] our help to deny to millions of Americans desperately-needed health insurance through a tortured, nonsensical construction of a federal statute whose manifest purpose, as revealed by the wholeness and coherence of its text and structure, could not be more clear.

As that one example illustrates, the D.C. Circuit is hardly the only one of our nation’s 13 federal circuit courts that looks very different today from when Bush left office. Where there was then only one circuit with a majority of its active judges nominated by Democratic presidents, today there are nine. 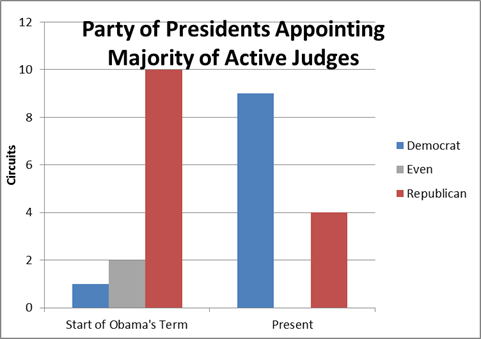 The past year has seen the confirmation of nominees like Michelle Friedland (9th Circuit), Pam Harris (4th Circuit), and Nina Pillard (D.C. Circuit), jurists who understand the impact of the law on everyday Americans, who cherish our constitutional principles of equality and liberty, and who don’t see the federal courts as just another part of government that can be used to enhance corporate power.

If the past few months have shown us anything, it is this: Standing up to bullies works. The White House has made judicial nominations that it can be proud of, and Senate Democrats have overcome years of Republican obstruction to get these nominees confirmed. Despite the GOP’s herculean efforts to prevent President Obama from exercising the powers he was elected – and re-elected – to use, he is successfully restoring balance to the nation’s courts. For the first time, the number of courtroom vacancies is close to where it was when Obama took office, and highly qualified jurists are taking their places on our federal circuit and district courts.

And the progress isn’t over. An additional 16 judicial nominees have been fully vetted and approved by the Judiciary Committee and are currently eligible for a floor vote – a floor vote that could have been held before the Senate left town for the elections. Several more have had hearings and should be ready for consideration by the Committee and the full Senate during the lame duck session that is scheduled to begin on November 12. And the White House just sent additional nominees to the Senate that could easily have hearings and a Committee vote during the lame duck session as well. There is absolutely no excuse for not holding confirmation votes on any of these committee-approved nominees by the end of this Congress.

During the last two years of the Obama Administration and the years that follow, we can be sure of certain things: The courts will remain critically important, and progressives will have to fight hard to protect those courts and keep them functioning effectively, with judges who won’t seek to use their positions to short-circuit our most important rights.