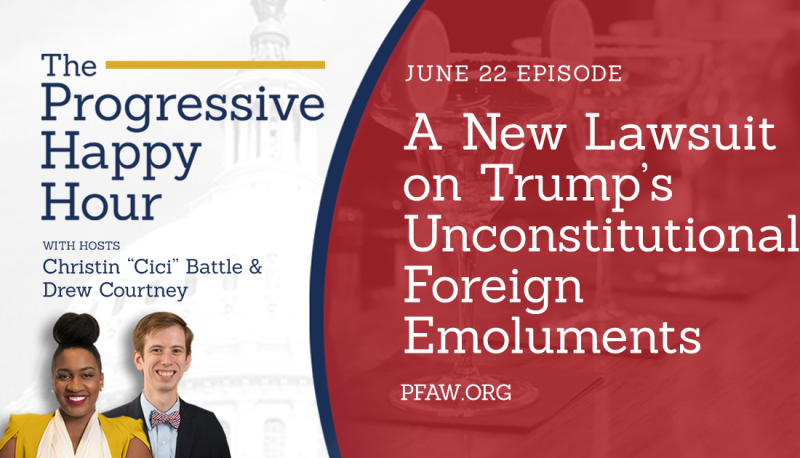 Since Donald Trump took office, his business dealings have raised serious legal and ethical questions about the conflicts of interest between his businesses and the American public.

In the June 22 episode of “The Progressive Happy Hour,” co-host Drew Courtney and PFAW’s senior director of outreach and public engagement Diallo Brooks sat down with Kristine Kippins, director of policy at the Constitutional Accountability Center (CAC), to discuss their lawsuit to hold Trump accountable for his violations of the foreign emoluments clause.

Kristine emphasized that the Constitution’s framers intentionally drafted the foreign emoluments provision to protect the American people from corruption by requiring Congress to affirmatively consent to the president accepting any benefits from foreign states. “Because [Trump] retained interest in the Trump organization, he is profiting from the presidency [by] selling real estate, receiving trademarks and regulatory benefits from foreign states all over the world where the Trump organization has an interest.” CAC represents 200 members of Congress for Trump having accepted foreign payments without their required consent; the organization is currently awaiting a decision from a federal judge on whether the parties have legal standing to proceed.

Kristine encouraged activists to hold the president accountable, and said, “Be active on social media with the hashag #NoOneAboveTheLaw. Tell your members of Congress how important this lawsuit is. And be vigilant about federal judicial nominations. This president has no regard for the law and the Republican congress has no interest in checking him, so courts are our last line of defense to be defenders of the rule of law. The future of the republic rests on a judiciary comprised only of fair-minded constitutionalists, and from what we’ve seen so far, we have reason to be nervous.”