Activists Rally Across the Country to Reject the Cover-Up in the Impeachment Trial of Donald J. Trump - People For the American Way
Skip to main content 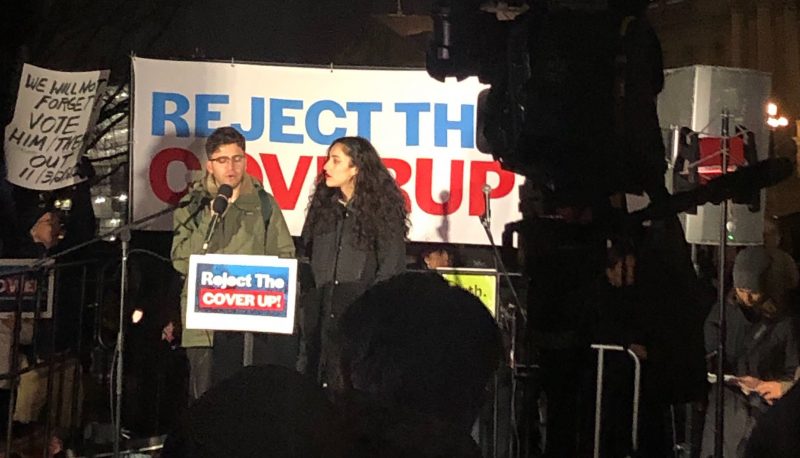 Speakers from By the People energize rally-goers at the Reject the Cover Up rally.

On February 5, People For the American Way members and other activists rallied in Washington, D.C. and in 300 communities across the country to denounce the failure of the Senate to remove Donald Trump from office. From the very beginning of the impeachment process, congressional Republicans worked to dismiss serious concerns about the president’s corrupt behavior, even though it will have lasting impacts on our national security. By refusing to even hear from key witnesses or require production of crucial documents, Sen. Mitch McConnell and Senate Republicans made a sham of the trial.

People For the American Way staff attended the rally in Washington, D.C. with more than 500 concerned allied activists, partner organizations, and members of Congress. Sen. Jeff Merkley, D-Ore., and Rep. Ayanna Pressley (D-Mass.,) joined advocates from organizations including PFAW, Public Citizen, Common Cause, By the People, and the Women’s March at the event. Senator Merkley opened the event with reflections about the undemocratic nature of the trial, expressing his frustration and disappointment with the partisan cover-up we all witnessed throughout the trial. He also emphasized the importance of advancing key reforms, like the Democracy For All Amendment and the election protections present in H.R. 1.

Senator @JeffMerkley talks about how never before have we seen an impeachment trial without evidence or documents— it’s not a trial, it’s a #CoverUp #RejectTheCoverUp pic.twitter.com/JsRnWAJPd7

Diallo Brooks, PFAW’s senior director of outreach and public engagement tied the cover-up to the State of the Union speech delivered the night prior, underlining the impact of this president’s actions on the American people. As he said, if Congressional Republicans aren’t doing their job, we cannot forget this November– they have to go.

“When people don’t do their job, they’ve gotta go” pic.twitter.com/3yhxv8SBow

Rep. Pressley’s remarks emphasized that although we were not able to remove the President from office, the grassroots movement to hold him accountable built momentum that we cannot afford to lose between now and November. Our democracy is at stake; now more than ever, we need to maintain our momentum to hold elected officials accountable for making our government work for us.

“Even if you’re tired, we do not have the privilege to stop” @RepPressley on the importance to keep mobilizing and to #RejectTheCoverUp pic.twitter.com/hw2I94FRQc