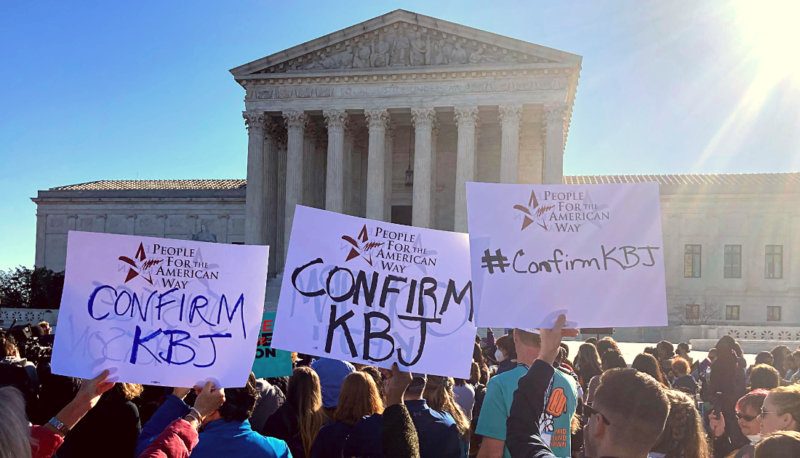 The week of Judge Ketanji Brown Jackson’s confirmation hearing started with a joyful rally on the steps of the Supreme Court, led by She Will Rise, National Women’s Law Center, and Black Women’s Roundtable.

We’re out here in this beautiful DC spring and getting fired up to #ConfirmJackon to the Supreme Court! Hearings start this morning, and we can’t wait for our #JusticeForAll to show the world how perfectly suited she is for the People’s Court. pic.twitter.com/UXtQQWuxr2

While People For President Ben Jealous prepared to attend opening day inside the Senate, People For staff and members gathered among the crowd of activists to celebrate Judge Jackson’s nomination and sterling qualifications.

People For’s African American Religious Affairs director, Reverend Leslie Watson Wilson, fired up the crowd at the start of the rally, proclaiming our joy and gratitude to be together in this historic moment.

Activists of all ages joined in the crowd’s excitement. Two young girls, Nuri and Neva, accompanied their mother to the event and decorated their own sign, which they proudly showed off to passersby.

Nuri & Neva came out today with their mom @BrownPhDGirl to urge the Senate to #ConfirmJackson to the Supreme Court. We’ve got activists of all ages out here today to show the world that we want Judge Ketanji Brown Jackson to be our #JusticeForAll! pic.twitter.com/1bTtxXnwDg

Black women leaders and advocates spoke throughout the program about what this historic moment means to them and what needs to be done to support Judge Jackson this week and during the rest of the process. When the hearing started and the rally broke up, activists left with a sense of purpose for how they could keep up the drumbeat to confirm Judge Jackson over the coming days and weeks.

Want to get involved today? Check out our digital activist toolkit, which has instructions for all the ways you can get involved to support Judge Jackson as our next justice for all. It’s being updated daily with videos and resources from the hearing!