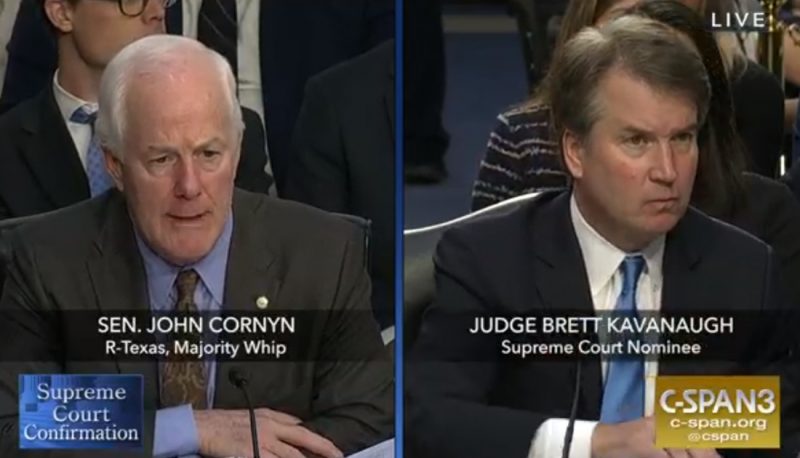 Republicans on the Senate Judiciary Committee made one thing clear today: they’re unwilling to let anything stop them from forcing Brett Kavanaugh’s nomination forward—not transparency, not committee rules, not the integrity of the Senate, not the will of the American people.

As part of the process, PFAW is regularly fact checking statements by the committee, witnesses and Brett Kavanaugh. On the first day of the hearing, dishonest representations of the truth came to light multiple times.

Senator Chuck Grassley portrayed Kavanaugh’s time as Staff Secretary as irrelevant to his role as a judge. But those remarks fly in the face of comments made by Kavanaugh himself, who pointed to the importance of his years as Staff Secretary during remarks at the opening session of the ninetieth Annual Meeting of the American Law Institute:

“When people ask me which prior legal experience has been most useful for me as a judge, I tell them I certainly draw on all of them, the clerkships, private practice at Kirkland, Independent Counsel’s office, even college jobs on the Hill at Ways and Means, but the five-and-a-half years in the White House, especially the three years as Staff Secretary for President Bush, are among the most interesting and most instructive, and so many memories come to mind and I think about so often.”

Senator Lee argued that as a judge on the DC Circuit, Kavanaugh ruled without respect to parties. In fact, a review of his record makes clear that Kavanaugh has routinely hewed to GOP policy priorities in key cases. As PFAW’s Senior Fellow Elliot Mincberg wrote last month:

Indeed, it is difficult to find a single example of a Kavanaugh opinion that has not favored right-wing policy and political positions in major cases. An independent report on his judicial record concluded that he is “an uncommonly partisan judge,” even when compared with other federal appeals court judges.”

FACT CHECK: Judges Just Call Balls and Strikes. Not according to Brett Kavanaugh.

The language echoes remarks by Chief Justice John Roberts who opined on the role of judge as umpire before voting repeatedly voting to undermine women’s access to reproductive health, undermining Civil Rights protections, overturning a century of campaign finance jurisprudence in Citizens United and attacking the rights of workers by overturning 40 years of precedent in Janus. Moreover, Kavanaugh himself has made clear that his umpire analogy doesn’t address some of the most important issues before the court. As PFAW Senior Fellow Elliot Mincberg pointed out:

“During his tenure as judge on the D.C. Circuit Court, Brett Kavanaugh has consistently ruled in favor of corporations and against workers, consumers, civil rights, and the environment. But is there an underlying theme or approach in American jurisprudence that explains Kavanaugh’s record? Although Kavanaugh would no doubt deny it, his judicial record makes clear that he is a conservative judicial activist who would pose serious dangers to our country if he joins the Supreme Court.

At his confirmation hearing, Kavanaugh will likely deny that he is a conservative judicial activist and will claim that he tries to be a neutral judge who calls balls and strikes like an umpire. But in a speech last year before the Heritage Foundation, he made an interesting admission. Judges should call balls and strikes like an umpire in most cases, he claimed. But “on occasion,” he stated, the “relevant constitutional or statutory provision may actually require the judge to consider policy.”

Kavanaugh Praises U.S. v. Nixon (After Suggesting It Should Be Overturned)

In hearings this morning on his nomination for the U.S. Supreme Court, nominee Brett Kavanaugh called U.S. v. Nixon “one of the greatest moments in American judicial history” to defend himself about accusations regarding his extreme view of presidential power. In fact, Kavanaugh has suggested that the case, in which the Supreme Court unanimously upheld a subpoena against President Nixon, should be overturned.

“It’s nice to hear Kavanaugh praise U.S. v. Nixon when he’s in the hearing room,” said PFAW Senior Fellow Elliot Mincberg, “but his record tells a very different story and makes it clear that anyone who cares about the rule of law should be deeply concerned with Kavanaugh’s views of presidential power.”

As the Associated Press reported in July:

Supreme Court nominee Brett Kavanaugh suggested several years ago that the unanimous high court ruling in 1974 that forced President Richard Nixon to turn over the Watergate tapes, leading to the end of his presidency, may have been wrongly decided.

Kavanaugh was taking part in a roundtable discussion with other lawyers when he said at three different points that the decision in U.S. v. Nixon, which marked limits on a president’s ability to withhold information needed for a criminal prosecution, may have come out the wrong way.

Kavanaugh’s belief in robust executive authority already is front and center in his nomination by President Donald Trump to replace the retiring Justice Anthony Kennedy. The issue could assume even greater importance if special counsel Robert Mueller seeks to force Trump to testify in the ongoing investigation into Russian interference in the 2016 election.

“But maybe Nixon was wrongly decided — heresy though it is to say so. Nixon took away the power of the president to control information in the executive branch by holding that the courts had power and jurisdiction to order the president to disclose information in response to a subpoena sought by a subordinate executive branch official. That was a huge step with implications to this day that most people do not appreciate sufficiently…Maybe the tension of the time led to an erroneous decision,” Kavanaugh said in a transcript of the discussion that was published in the January-February 1999 issue of the Washington Lawyer.

At another point in the discussion, Kavanaugh said the court might have been wise to stay out of the tapes dispute. “Should U.S. v. Nixon be overruled on the ground that the case was a nonjusticiable intrabranch dispute? Maybe so,” he said.

Yes, the Federalist Society Knows a Lot About Brett Kavanaugh

n Senate hearings today, under questioning from Sen. Mike Lee, Supreme Court nominee Brett Kavanaugh said that he hadn’t been contacted by any representatives of the Federalist Society with regard to the vacancy created by the resignation of Justice Kennedy. The implication was that neither the Federalist Society nor Donald Trump had any particular insight in how Kavanaugh would rule in particular issues.

“The idea that the Federalist Society doesn’t have a crystal clear picture of Brett Kavanaugh’s views on any number of issues is laughable,” said PFAW Vice President for Communications and Research Drew Courtney. “The Federalist Society and the Heritage Foundation are knit into the fabric of the right-wing legal movement. When they approved Brett Kavanaugh for this job, their judgement was based on Kavanaugh’s years working and living alongside the rest of the conservative legal establishment. We may get to read his decisions, but they had the benefit of casual conversations after panel discussions, at cocktail parties, and at the office. Brett Kavanaugh is a rock solid vote for the far-right. That’s why he was chosen.”

As Courtney wrote in June:

Every candidate on the list was approved by both the Federalist Society and the Heritage Foundation, two right-wing legal organizations deeply committed to overturning the decision both of which have had ample opportunity to make certain they know exactly where each potential nominee stands on the issue. The idea that either organization would recommend a Supreme Court Justice to Donald Trump without an iron-clad understanding, explicit or implicit, that he or she would overturn Roe is laughable.

Trump’s last candidate, Neil Gorsuch, got a lot of mileage out of feigning indignation at the possibility he’d be asked to commit to overturning the ruling recognizing women’s constitutional right to abortion. With his best steely glare he declared “No … I would have walked out the door. That’s not what judges do.” Commentators fawned over his performance, but few of them mentioned that he never mentioned whether he’d ever discussed the issue with anyone associated with the Federalist Society or Heritage, and his answer didn’t give pause to any of the anti-choice groups enthusiastically backing his confirmation.

Let’s not pretend that Donald Trump simply chose these organizations out of thin air. They were specifically chosen to assuage the Religious Right’s anxiety about supporting Trump’s candidacy. The entire point of bringing those groups into the process was to guarantee that his nominee would be rigidly anti-choice.

Trump’s allies are free to pretend that his nominee to the Supreme Court will have an open mind when it comes to abortion, but the rest of us aren’t obligated to believe them.

In Senate hearings on the nomination of Brett Kavanaugh to the Supreme Court, Senators had trouble agreeing on just how often the Supreme Court had adopted Kavanaugh’s reasoning. In Kavanaugh’s senate questionnaire he identified nine such cases. At the hearing yesterday, according to Senator Portman, the number was thirteen, today in comments by Senator Charles Grassley the number had fallen to twelve and by early evening Kavanaugh brought it back up to thirteen in response to Senator Crapo.

Whatever the number, this claim is false. Of the thirteen cases most likely to be on Senate Republicans’ shifting list, in six cases, the Court did not agree with Kavanaugh on the merits and in four his views were supported only by what Senator Whitehouse has called the “Roberts 5”—the right-wing majority on the Court, who are among Kavanaugh’s biggest fans. Only in three cases did the Court by consensus agree with Kavanaugh, and the Court reversed him in another important case.

Kavanaugh’s dissenting view was adopted in whole or in part by the Court in four cases, all of which were decided 5-4 with the “Roberts 5” in the majority and the four moderate justices vigorously dissenting. These include the Free Enterprise Fund case concerning the constitutionality of the Public Company Accounting Oversight Board; the White Stalliondecision concerning cost-benefit analysis by the EPA;  Coalition for Resp. Reg. v. EPAconcerning greenhouse gas emissions by autos and trucks; and the recent Jesner ruling that foreign corporations cannot be sued under the Alien Tort Statute.

Cases where Court by consensus agreed with Kavanaugh (3)

There are only three such cases: United States v. Papagno , where the Court in a later opinion  agreed with a unanimous Kavanaugh opinion  adopting a more narrow interpretation  of the Mandatory Victims Restitution Act than had some other courts; Wesby v. D.C., where  the Court unanimously reversed the majority opinion and accepted his view of qualified immunity favoring police officers; and a reference among several other cases by Scalia  in a footnote (4)  in  Lexmark Int’l v. Static Control Components to an unrelated standing point in a  Kavanaugh dissent in Grocery Manufacturers

Note: In an important environmental case, EME Homer City Gen. LP v. EPA (2012): The Supreme Court overturned a Kavanaugh decision rejecting an EPA rule that held upwind states partly responsible for air pollution they cause in downwind states. The Court’s decision was 6-2 and criticized  Kavanaugh for reading “unwritten” requirements into the Clean Air Act, noting that a reviewing court’s job is to “apply the text” of the statute, “not to improve upon it.” Mentioned in CRS rept Table A-3

In only 3 other cases in the recent CRS report did Court opinions cite Kavanaugh (CRS report tables A4 & 5 are:)