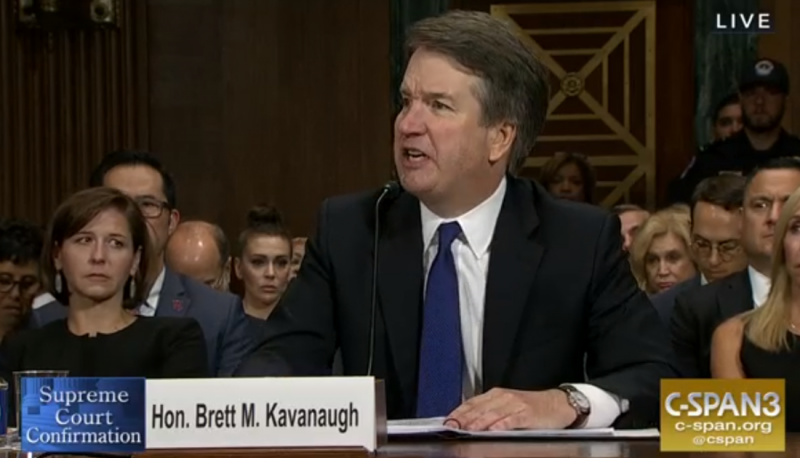 Imagine the Brett Kavanaugh nomination playing out in another country where only the names are changed and ask yourself: Is this what democracy looks like?

Let’s say it’s Venezuela. The Chavistas control the presidency and the legislature, and the high court nominee is a fellow Chavista who worked in the presidential palace for several years before getting his current position.

President Maduro’s allies in  the legislature ask to see records from the nominee’s years working for Chávez, but—over the opposition’s protest—they exclude a critical time period from their request.

Maduro’s fellow Chavistas in the legislature  refuse to allow the nation’s Archives—universally trusted as independent of the nation’s political parties—to take the time needed to go through all the records from the nominee’s time working for Chávez. Instead, they  assign the task to an activist who was Chávez’s attorney, and who still represents numerous high-level members of the ruling party. They let him go through the records and, without oversight, decide which ones legislators will be allowed to see. (When he is done, he formally joins President Maduro’s strategy team to get the nominee confirmed.)

The ruling party calls for a confirmation hearing even before the opposition can go through the already-filtered records they are being allowed to see. In fact, the Chavistas dump a few thousand new documents out the night before. The socialists call this “openness.”

A few of the records reveal that the nominee was not honest with the legislature back when Chávez nominated him for his current position. The party attorney is allowed to declare those documents viewable only by legislators and not the public.

Under pressure from the opposition, who the ruling party fears will make the records public anyway, Maduro’s party relents and allows their release. The nominee is revealed as having lied under oath multiple times about some of the more unseemly things he did for Chávez in order to get his current job.

When allegations of sexual assault are made against the nominee, the Chavistas are pressured into allowing an investigation. But they control the department looking into the allegations, and investigators go out of their way to not collect relevant evidence and question essential witnesses.

At every stage, the opposition protests. They cite the overwhelming and increasingly voluminous evidence that the nominee has lied under oath over and over and over again, about his record under Chávez and about sexually assaulting young women.

The ruling party ignores them. They want this seat on the court, and they will do what it takes to get it.

If this happened in Maduro’s Venezuela, Putin’s Russia, Khamenei’s Iran, Erdoğan’s Turkey, or Orbán’s Hungary, we would recognize it as a direct assault against democracy and an effort to grab power over the independent judiciary.

It’s happening here, and we must act as if our freedom were at stake. Because it is.