Kavanaugh’s Testimony Further Demonstrates Why He Should Not Be Confirmed 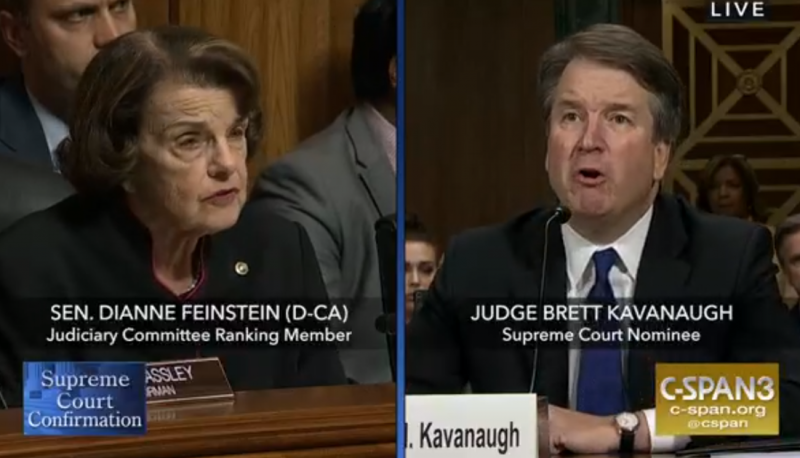 Both Republicans and Democrats deserve credit for insisting on an FBI investigation into allegation s of sexual assault by Supreme Court nominee Brett Kavanaugh. That FBI investigation may not fully resolve these serious allegations, particularly in light of reported limits on the investigation and the requirement that it be completed in one week. But as that investigation proceeds, the Senate and the American people should consider what last week’s testimony tells us about Kavanaugh’s job interview for a lifetime seat on the Supreme Court. In fact, the testimony reinforces the key reasons that Kavanaugh should not be confirmed: Kavanaugh has a political agenda, and lacks the open mind, honesty and credibility to be promoted to a seat on our nation’s highest court.

Even before last week’s hearings, Kavanaugh’s record made clear that instead of an open mind, he has a political agenda as he reviews important cases, favoring right-wing policy positions and the interests of corporations over workers, consumers, civil rights, civil liberties, and the environment. Kavanaugh, who has previously described himself as a Republican, has a career of partisan advocacy on matters ranging from the Starr report to the 2000 Florida recount for Bush to his work on legislative and other issues while in the Bush White House for more than five years. This itself is not necessarily disqualifying. But what is more disturbing is that in important cases that concern hotly contested policy and political issues, Kavanaugh consistently favors ultra-conservative Republican positions that reflect his ultra-conservative Republican political background, often disagreeing with other Republican appointees to his court.

This has proven true in a broad range of areas, including reproductive rights and abortion, climate change and the environment, gun safety, net neutrality, the Affordable Care Act, money in politics, efforts to help consumers and rein in big banks, disability and civil rights, presidential power, and claims of religious exemptions from providing legally required contraceptive coverage to women. In all of these, Kavanaugh has consistently voted in accord with ultra-conservative policy and political positions, even when other conservative Republican judges on the D.C. Circuit have not. As an independent report on Kavanaugh’s judicial record concluded, he is “an uncommonly partisan judge, even when compared with other federal appeals court judges.”

If there was any question remaining as to Kavanaugh’s support of partisan, right-wing views, he answered it in his opening statement last Thursday. He angrily claimed that the sexual assault allegations, including Dr. Christine Blasey Ford’s remarkable testimony, were part of a “calculated and orchestrated political hit” that was “fueled” by factors like “apparent pent-up anger about President Trump and the 2016 election” and “revenge on behalf of the Clintons.” He attacked Democratic Senators on the Committee, calling their behavior at his first hearing “an embarrassment” and accusing them of “lying in wait” to spring allegations against him. One legal commentator noted that Kavanaugh “dropped any pretense of non-partisanship” and that if he is confirmed, “there is no question whose bidding he will do on the bench.” Yale law professor Judith Resnik similarly concluded that Kavanaugh’s testimony was “partisan and not judicious,” and that his confirmation could put the Supreme Court “under a cloud of politics and scandal from which it would not recover for decades.” Kavanaugh‘s political agenda in itself already disqualifies him from serving on the Supreme Court.

But Kavanaugh’s performance on Thursday strongly reinforced that, aside from his conservative partisanship, he does not have the honesty, trustworthiness, and credibility that are needed for a lifetime seat on the Court. Kavanaugh’s testimony at previous hearings was full of misrepresentations and what many have called outright lies. As selective aspects of his record during the Bush Administration came to light, it became clear that he lied about or misrepresented a number of subjects, including his knowledge and use of documents stolen by a former Republican staff member, the degree of his involvement in several controversial Bush judicial nominations, his involvement in warrantless wiretapping and other questionable conduct by the Bush Administration, and his views on Roe v. Wade. In fact, he even misrepresented or distorted his own judicial opinions to the Senate Judiciary Committee in an effort to make his record appear more acceptable for elevation to the Supreme Court.

Kavanaugh’s misrepresentations or prevarications continued on Thursday. For example:

The pending FBI investigation will likely not resolve exactly what happened with respect to these serious sexual assault claims against Brett Kavanaugh. But with respect to his job interview for the Supreme Court, for which he bears the burden to prove that he should be confirmed, it is clear, as a writer for Forbes magazine has concluded, that Kavanaugh has “failed the test.” Indeed, if Senate Republicans confirm Kavanaugh in light of the “stark new evidence” that he himself has provided, “they risk causing grave reputational damage both to their party and to the Supreme Court itself.”