Let’s Hold Our Applause for Jeff Flake and Bob Corker 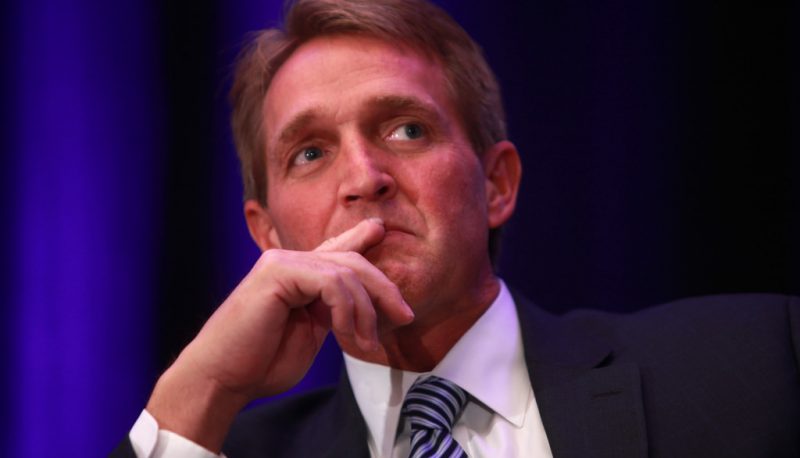 We’re glad to see any Republican member of Congress speak out against Trump’s outrageous affronts to our constitutional values and the GOP’s complicity in those affronts.

However, the public rebukes of Trump by Senators Jeff Flake of Arizona and Bob Corker of Tennessee smack of the kind of disingenuous handwringing that we’ve unfortunately come to expect from self-aggrandizing politicians.

The dominant media narrative is that now that these senators have decided to retire, they are “free” – unburdened by the need to play to the pro-Trump Republican base in order to get reelected. So at least there’s the acknowledgement that courage and sacrifice are not at the heart of their criticism. But what about the fact that both of these senators – like virtually all of their Republican colleagues – have voted in lockstep with this president’s extreme agenda?

According to FiveThirtyEight’s vote tracker, both Flake and Corker have voted with Trump roughly 90% of the time – and that number goes way up if you focus on the big votes that indicate any sort of ideological position, like votes to repeal health care and confirm Trump’s extreme judicial and executive branch nominees.

Here’s a telling headline from The Intercept: “After Day of Feuding, Jeff Flake and Bob Corker Join Trump to Upend a Major Consumer Protection.”

Can they possibly be that self-unaware? Do they not realize that the right-wing policy agenda shared by both Trump and congressional Republicans is, in fact, the policy equivalent of all the things they say they despise about Trump?

The policies are clear attacks on the rights of marginalized communities – be they immigrants, racial and religious minorities, LGBTQ people, or women…

And, of course, there’s the assault on our democratic norms and institutions. This started before Trump ever secured the presidential nomination and has continued through his presidency.

Trump is not the first Republican to nurture the party’s radical right-wing base by playing to racists and conspiracy theorists and attacking the legitimacy of our free press. And Senate Republicans specifically, including Flake and Corker, bear much of the responsibility for creating what has since come to define the Trumpism that now seems to so appall them.

Well before Trump ever secured the GOP nomination, throughout all eight years of the Obama presidency, Senate Republicans engaged in unprecedented obstruction of his judicial nominees. This was most egregious in their blockade of Obama’s Supreme Court nominee, the eminently qualified and universally respected Merrick Garland, in order to hold the seat open for Trump’s eventual right-wing nominee.

Since Trump took office, Senate Republicans have broken Senate traditions and eschewed comity and civility to ram through Trump’s nominees – many of whom are among the most horrifically extreme and bigoted ideologues to be nominated to our federal courts in modern times.

Senator Flake says he didn’t vote for Trump, but did he urge people to vote to keep him out of the White House with the only vote that could have done that, a vote for Hillary Clinton? And Bob Corker did support Trump’s campaign for president. He says he wouldn’t do it again, but did he really expect Trump as president would be a completely different person than the one he showed himself to be as a candidate?

It’s great that Senators Flake and Corker are speaking out so forcefully now against normalizing Trump, even if it’s because they have decided not to face the wrath of Trump’s loyal base in their bids for reelection. But what about the normalization of the Republican Party’s extremist agenda? Trump and his movement were born of the growing influence of the Radical Right, the Tea Party, and the right-wing media — led by, but certainly not limited to, Fox News. And that’s something Republicans like Flake and Corker have both fed and benefited from for years.

So let’s not forget – or forgive – the hypocrisy of calling out Trump now for his “behavior” when it’s his policies – the policies that Flake and Corker support – that are really, as Flake said, “debasing” our nation.