Mitch McConnell: Doing the Least He Can Possibly Do - People For the American Way
Skip to main content

Mitch McConnell: Doing the Least He Can Possibly Do

Last week, PFAW’s Paul Gordon pointed out that Senator Mitch McConnell’s ongoing campaign to obstruct President Obama’s judicial nominees had resulted in not a single new judge since Republicans took over the US Senate. If there’s been no movement it certainly hasn’t been for lack of need. The number of judicial vacancies has risen from 40 to 51, and the number of judicial emergencies has doubled from 12 to 24. Yet up until recently, Senator McConnell hasn’t seen fit to allow a vote on a single nominee.

But lest anyone think that Mitch McConnell hasn’t been paying attention to the judicial vacancy crisis or the Americans who pay the price when their cases are delayed or relocated, today everything changed: today Senator McConnell allowed a vote on … one judicial nominee!

Surely, Senator McConnell’s name will now be listed along with the great senate leaders of our history because he finally brought himself to allow a vote on one, single, solitary nominee. Just look at those numbers! 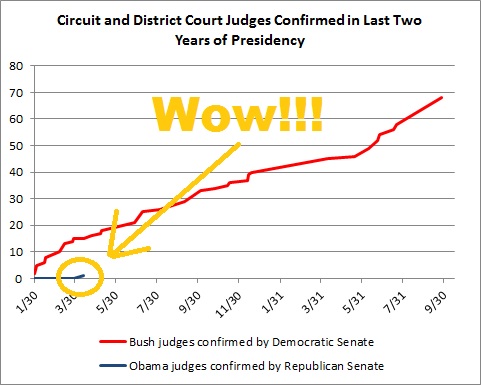 Truly, Senator McConnell, your willingness to move heaven and earth to do—literally—the least you could possibly do to put partisanship aside and perform the duties you’re paid for is an inspiration to us all.

Let’s give you a round of applause. You earned it.