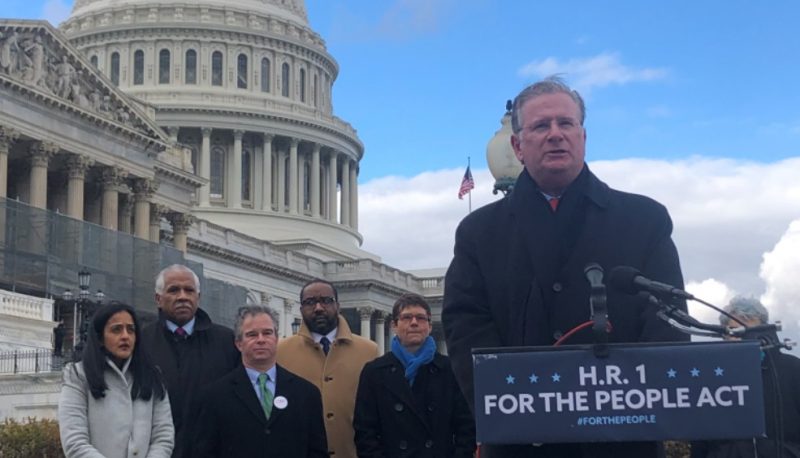 The public sent a clear message in the 2018 midterms when the Democrats they elected took back the House in a historic victory. Voters are fed up with government corruption, attacks on voting rights, and the influence of big money in politics. In response, House Democrats have introduced H.R.1, or the For the People Act, a bold piece of legislation that seeks to restore and strengthen policies long championed by the American people as essential to ensuring that the voices of all people are reflected in the actions of their elected officials.

In a showing of solidarity in support of H.R.1, People For the American Way (PFAW) joined a diverse coalition of organizations and activists who rallied at the Capitol on January 9 to encourage Congress to make the act a priority. Some of the organizations included the NAACP, Public Citizen, National LGBTQ Task Force, the Leadership Conference on Civil and Human Rights, and Democracy 21.

The first two speakers were Reps. John Sarbanes, D-Md., and Katie Porter, D-Calif., two champions of the bill. Both spoke about how their constituents feel disconnected from Washington and the need to make people feel a part of the democratic process again. Rep. Sarbanes mentioned the government shutdown and stressed that when it ends, things cannot go back to business as usual on the Hill. Washington is overdue for major reforms. Rep. Porter spoke of her recent campaign where she refused to take money from special interest donors, making her accountable to the voters in her district alone.

“We are living proof that you can get elected in tough districts by doing what’s right on special interest money.” – @katieporteroc #HR1 #ForThePeople pic.twitter.com/eLg73FaW1b

PFAW President Michael Keegan stressed the importance of building support for this bold legislation now to ensure that our representatives act on the reforms that can create a democracy that works for everyone. He stated that “this legislation is designed to make sure the voices of the people are listened to in Washington” and waiting to move forward with its introduction is unacceptable.

“The time is now to get this done… reform is needed and it’s needed now.” @MBKeegan, PFAW #HR1 #ForThePeople pic.twitter.com/ktrcpXnzKb

Another featured speaker was Fred Wertheimer of Democracy 21, who also spoke about the importance of patience and persistence with a bill like this, and stressed that it can take up to five years for a major piece of legislation to pass, but that it will get done. He stated that the coalition would persevere throughout the legislative process and not weaken the original proposal.

“We do not enter this battle wearing rose colored glasses. We know it will be difficult and take time… this fight will not stop until H.R.1 is enacted.” @FredWertheimer @democracy_21 #HR1 #ForThePeople pic.twitter.com/UIeFm8fYZf

Rea Carey of the National LGBTQ Task Force explained that voting rights are LGBTQ rights because democratically elected officials have so much sway over the lives of members of the LGBTQ community who still lack basic legal protections against discrimination. She also explained that harsh voting laws could disproportionately affect the trans community who have historically had a difficult time obtaining voter identification that matches their gender identity.

As this landmark legislation makes its way through the committee markup process and onto the floor of the House of Representatives for debate and an eventual vote, People For the American Way will continue working with our partners to mobilize public support. The “For The People” act represents years of organizing and actions taken by people like you, and this milestone achievement will serve as a foundation to build on in the weeks, months and years to come.