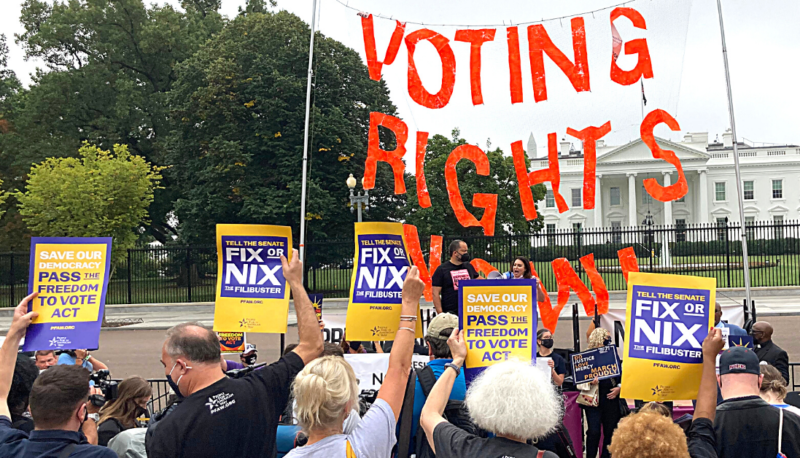 Across the country, Republican state legislators have been busy imposing new voting restrictions and devising corrupt redistricting schemes to give their party more power than they could win under a fair system. Republicans in the U.S. Senate protected that wrongdoing again in October by using filibuster rules to stop federal voting rights legislation from coming up for debate. This is political obstruction of justice, and President Joe Biden and Senate Democrats must not allow it to stand.

One day before Senate Republicans made it clear that they have no interest in protecting the right to vote or a healthy democracy, 25 religious and civil rights leaders and voting rights activists were arrested in front of the White House. Hundreds more joined us in solidarity as we marched, sang, prayed, and demanded stronger leadership from President Biden.

We know that President Biden is a supporter of voting rights. His stirring speech at the National Constitution Center called voting rights the test of our time and brought moral clarity to our cause.

In the eight years since the Supreme Court gutted the Voting Rights Act, dozens of states have erected new barriers that target voters who are Black, brown, female, and young. A flurry of new laws was introduced this year after record voter turnout contributed to the defeat of President Donald Trump and the loss of Republican control in the Senate.

The Freedom to Vote Act would reverse many of the new anti-voter laws. It would expand access to voting by mail and early voting, make voter registration automatic, and make Election Day a federal holiday. Together, these measures will increase access to voting for working people, Black and brown voters, women, and people with disabilities. The bill will also end abusive partisan redistricting and help stop billionaires from buying our elections.

All 50 Senate Democrats support the Freedom to Vote Act, as does Kamala Harris, our nation’s first woman Vice President, who is prepared to cast the 51st vote. But Senate Republican Leader Mitch McConnell has demanded that his colleagues keep that vote from happening. They are preventing the will of the people from being realized.

With voter suppression and partisan redistricting threatening next year’s elections, we don’t have time to wait. The Freedom to Vote Act must become law now.

President Biden must use all his personal influence and the power of his office to protect voting rights. He must publicly call on Senate Democrats not to let Republicans’ resort to the tactics of Jim Crow succeed in blocking voting rights protections for our generation.

Those of us who have gathered at the White House are keenly aware of the generations of activists who put their bodies on the line to secure and expand the right to vote—including suffragists who faced beatings for having the audacity to demand the right to vote for women, and activists who risked and sometimes gave their lives to protect Black Americans’ right to vote. And we know the essential role that presidential leadership has played in overcoming resistance to voting rights.

This is a time for the “good trouble” that the great John Lewis called for at the height of the civil rights movement.  We will be back at the White House throughout the fall, in greater numbers, to demand that President Biden do what it takes to get voting rights legislation onto his desk and signed into law this year.

An Extraordinary Life, Linking Past and Present