Thanks, Mitch: Confirmed Judges to Skyrocket From One to Two - People For the American Way
Skip to main content

Thanks, Mitch: Confirmed Judges to Skyrocket From One to Two

The GOP-controlled Senate's record for slow-walking President Obama's judicial nominees stands in stark contrast to how the Democratic-controlled Senate confirmed George W. Bush's judicial nominees in his final two years. Democrats shepherded 68 of Bush's circuit and district court judges through confirmation in his last two years, including 15 by this point in 2007.

Back in February, the Judiciary Committee unanimously approved four district court nominees from Texas and Utah. But it wasn't until last week that Senate Majority Leader Mitch McConnell finally allowed a vote on one of them, the first and only judicial confirmation vote of the 114th Congress.

Today, McConnell is taking aggressive action by scheduling a Senate vote on … one of the three remaining district court nominees that have been pending on the floor for nearly two months. Wow, one! Such progress!

The sky's the limit! 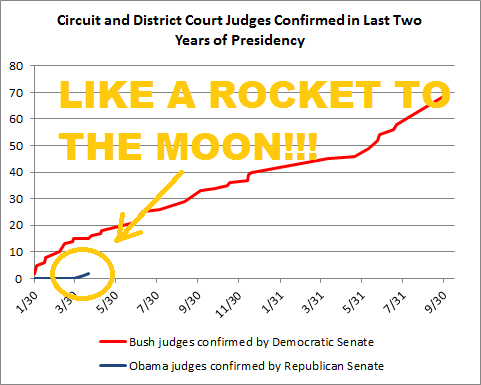