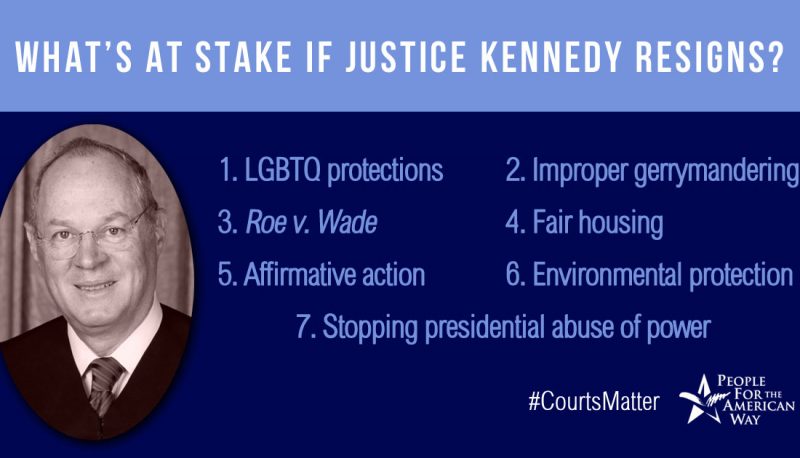 Stimulated by comments from Republican Senator Charles Grassley and unnamed White House sources, speculation is rampant that Justice Anthony Kennedy will retire from the Supreme Court this summer. For the values and rights that most Americans cherish, the results of a resignation by Justice Kennedy and his replacement by a Donald Trump nominee would be disastrous. This is true concerning LGBTQ rights, reproductive rights, the environment, and other key issues. Kennedy’s historic and continued role on the Supreme Court is crucial.

Although Justice Kennedy has often joined the right-wing members of the Roberts-Alito Court in severely cutting back rights and liberties, he has also joined the moderates on the Court to produce crucial but fragile 5-4 decisions that have protected rights. Nowhere has this been more clear than on the rights of LGBTQ individuals. He was the author of the critical 5-4 Obergefell decision that recognized equal marriage rights, which the dissenters attacked as illegitimate and vowed to try to overrule. In fact, far-right groups like the National Organization for Marriage are already vowing to push for a replacement for Kennedy “who will have the courage to vote to reverse the illegitimate, anti-constitutional Obergefell ruling.” Justice Kennedy also was the author or the deciding vote in key opinions that struck down the so-called Defense of Marriage Act and ruled that an anti-gay law student group could not demand school funding while violating anti-discrimination rules. And with other important LGBTQ issues headed for the Supreme Court, such as whether existing anti-discrimination laws cover at least some anti-LGBTQ discrimination, replacing Justice Kennedy with a right-wing Trump nominee would be devastating for LGBTQ rights.

Replacing Justice Kennedy with a far-right nominee would also be disastrous for reproductive rights. Kennedy is the only justice remaining on the Court who was part of the important plurality in the Casey decision that voted to uphold the “essential holding” of Roe v. Wade and strike down part of a restrictive Pennsylvania abortion law. More recently, Kennedy joined the Court’s moderates to provide the fifth vote to strike down an extremely restrictive Texas abortion law in the Whole Women’s Health case. The decision strongly reaffirmed Casey and the principle that laws that impose an “undue burden” on women’s ability to obtain an abortion are unconstitutional. While Kennedy has sometimes voted with right-wing members of the Court on abortion issues, it is no exaggeration to say that if Kennedy is replaced by a far-right Trump nominee, the “undue burden” standard and Roe v. Wade itself are in serious jeopardy.

Civil and voting rights are also in serious jeopardy if Justice Kennedy resigns and is replaced by a right-wing Trump nominee, especially key protections concerning redistricting and affirmative action. Notwithstanding his agreement with other Roberts-Alito rulings that have cut back on voting rights, Justice Kennedy has provided the crucial fifth vote in several decisions that struck down or allowed challenges to Alabama and Texas state redistricting plans that harmed minority voters, as well as in a ruling that upheld an Arizona plan to help remove partisanship from redistricting though use of a nonpartisan commission. One more vote with justices like Thomas and Alito in these and future cases would seriously harm African American and Latino voters. In 2015, Justice Kennedy wrote what the New York Times called a “critical” 5-4 decision joined by the Court’s moderates that upheld the principle that the federal Fair Housing Act prohibits practices with a discriminatory effect and thus continued to combat harm to “minorities and other vulnerable groups the law was written to protect.” And just this year, Justice Kennedy was the deciding vote and the author of a closely-divided opinion that upheld a University of Texas affirmative action plan to promote diversity, rejecting the dissent of right-wing justices who would have effectively eliminated such affirmative action in higher education.

Replacing Justice Kennedy with a far-right Trump nominee also threatens serious damage to efforts to protect the environment. Particularly with President Trump poised to roll back existing environmental protections, it is critical that states and others have the ability to challenge restrictive EPA actions. Justice Kennedy was the crucial fifth vote in Massachusetts v. EPA, a decision that sustained such a challenge to the EPA’s failure to regulate greenhouse gas emissions and ruled that the EPA indeed had such authority and responsibility. Without Kennedy’s vote, future challenges to harmful EPA actions are much less likely to succeed. And Justice Kennedy again made the difference in the Rapanos case that, if the far-right justices had prevailed, would have further reduced the amount of wetlands covered and protected by the Clean Water Act. Although Justice Kennedy has sided with right-wing justices in a number of environmental cases, his willingness to stand with the Court’s moderates in several key rulings has been crucial, and will be even more so under the assaults on environmental protection expected under the Trump administration.

Justice Kennedy’s vote has also been crucial in a number of Court rulings that have protected against government and corporate abuse. For example, in Boumediene v. Bush, Justice Kennedy wrote a 5-4 decision joined by the Court’s moderates that struck down key parts of a Bush administration-supported law and ruled that prisoners detained at Guantanamo can file habeas corpus claims in federal court to challenge detention. The Bush administration argued that even if there was a constitutional right to file such claims, a Congressional statute supported and signed by the president could limit that right. The majority emphatically disagreed. As Justice Kennedy wrote, to “hold that the political branches may switch the Constitution on or off at will would lead to a regime in which they, not this Court, say what the law is.” A federal court of appeals has recently cited that language in rejecting a similar argument by the Trump administration in favor of its immigration ban. Replacing Justice Kennedy with a far-right justice threatens this important principle, which could not be more important under the Trump administration.

In addition, Justice Kennedy was the deciding vote in the Altria case, in which he and the Court’s moderates barely rejected a claim by tobacco companies that they could not be sued for damages under state law for deceptive tobacco ads because of federal tobacco ad regulation. One more vote with right-wing justices would have, and could in the future, reverse this and similar holdings.

The bottom line is clear. Justice Kennedy’s vote and voice have literally made the difference between protecting crucial rights for all Americans and sacrificing such rights to assaults by restrictive government and corporate action. A full report on the cases where he made the difference is here. His continued presence on the Supreme Court is critical. But if rumors are true and he does resign from the Court, Americans must be prepared to stand up and take action to prevent President Trump from replacing Justice Kennedy with another right-wing justice.