The Pot, the Kettle, and Mitch McConnell - People For the American Way
Skip to main content

The Pot, the Kettle, and Mitch McConnell

The survival of our democracy depends on having independent courts with judges who protect everyone’s rights and who won’t let anyone trample on the Constitution. So it’s no surprise that Donald Trump and Mitch McConnell are moving at light speed to transform our federal judiciary into a body of partisan ideologues who can be counted upon to support the GOP’s agenda.

In the latest move, McConnell has set the stage to push four extremist circuit court nominees through the Senate this week: 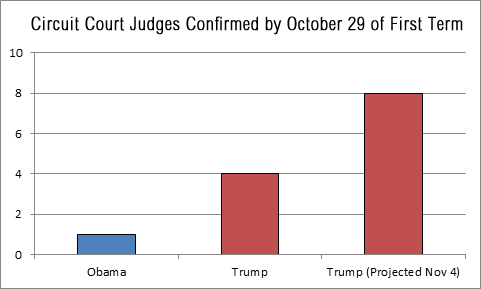 While only one Obama circuit nominee had been confirmed at this point in his presidency, the GOP-controlled Senate has already confirmed four of Trump’s circuit court nominees. McConnell plans to double that to eight this week, claiming that he is fighting to overcome “the often mindless partisan obstruction we’ve been seeing across the aisle.”

I don’t know what aisle Mitch is looking across, but he sure can’t be talking about the Democrats.

All four of the nominees have gotten through the Judiciary Committee because a Democratic home-state senator returned a “blue slip” signifying that they didn’t object to the committee holding a hearing for the nominee.

Of the eight Trump nominees either already confirmed or scheduled for this week, five of them are being nominated to fill vacancies that only exist due to unyielding Republican obstruction of President Obama’s nominees:

And now McConnell is accusing Democrats of obstruction??? That takes gall.

Yet the majority leader wasn’t done. Referring to the (non-existent) Democratic obstruction, he insisted that “it didn’t stop the Senate from confirming [Oklahoma district court nominee] Scott Palk.”

Huh? Does he mean the same Scott Palk who Obama nominated back in 2015, who was approved by the Judiciary Committee by unanimous voice vote on May 19 last year, and yet was denied a floor vote month after month after month by Mitch McConnell?

Yep, that’s the one. But Palk was only one of many similarly blocked Obama nominees. During the 115th Congress, the GOP-controlled Senate confirmed a mere 22 Obama nominees: two circuit court judges, 18 district court judges, and two judges for the Court of International Trade. In contrast, the Democratic-controlled Senate confirmed 68 judges in George W. Bush’s final two years. The last time the Senate confirmed so few judges was way back during the Truman administration—and there were a lot fewer judgeships to fill back then.

McConnell’s lies are so brazen that they should come with a laugh track. Unfortunately, this situation isn’t funny. He and Trump are quickly transforming the American judiciary into one they hope will not let pesky things like the Constitution or democracy get in their way of the plans that they and their billionaire donors have in store for us.