The Progressive Happy Hour: LGBTQ Rights in 2019     - People For the American Way
Skip to main content 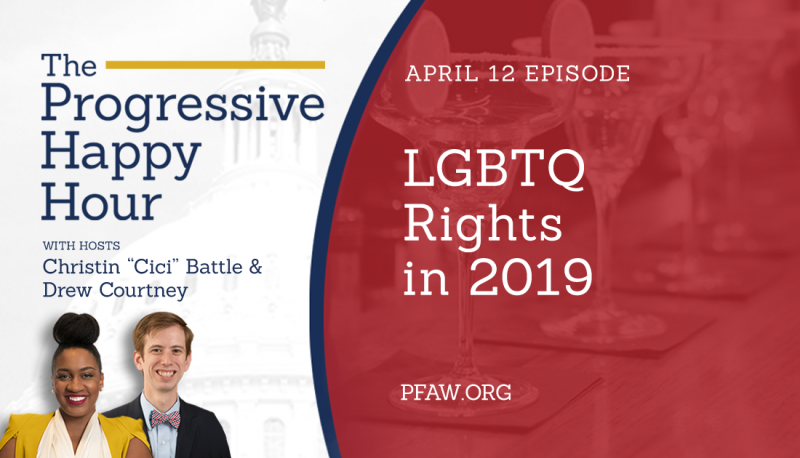 Today, Trump’s dangerous and discriminatory transgender military ban went into effect. The ban bars openly trans people from serving and those wishing to serve their country from enlisting, and strips certain medical and other benefits from trans servicemembers and their families. But  amid this dark moment, the newly-introduced Equality Act offers a glimmer of hope for the LGBTQ community. If passed, this bipartisan bill will affirm federal protections against LGBTQ-based discrimination in key areas of life.

In the April 12 episode of “The Progressive Happy Hour,” cohosts Drew Courtney and Cici Battle talk to Jen Herrick, PFAW’s senior policy analyst, about the trans military ban and the Equality Act, and what progressives can do to advance equality for the LGBTQ community.

Jen emphasized how damaging the trans military ban is, saying, “President Trump is not only discriminating against honorable servicemembers, he’s endangering their mental and physical health … He’s telling them that they have to deny their identity to serve. That’s not healthy and it’s not right … he’s also endangering our national security by pushing these good and honorable troops out of the service when they deserve the same dignity and respect afforded to anyone else who serves.”

Jen explained that the Equality Act was introduced in both the House and the Senate recently, and shared that this legislation will “fill a number of gaps. We’ve had court rulings in recent years that have [affirmed that existing sex discrimination laws protect against anti-LGBTQ bias]. What the Equality Act does is it takes those court rulings and makes those protections really explicit in federal law … it’s adding sexual orientation and gender identity into [existing housing, civil rights, credit, and jury service laws] … until they’re explicit in federal law, there’s really not a 100% clear place to turn.”

Jen encouraged listeners to call their members of Congress to urge them to support the Equality Act and sign PFAW’s Equality Act petition to demonstrate public support for this critical legislation.