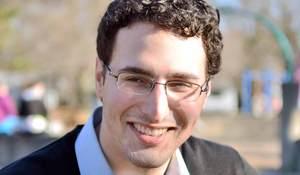 Aaron Regunberg is a community organizer and state Representative in Providence, Rhode Island. During his first term as state Representative, Aaron has fought for legislation to strengthen public schools, working families, and the environment. He is proud to have led successful efforts to raise the minimum wage (including the first increase for Rhode Island tipped workers in more than two decades), win millions more dollars in school facilities funding, and found a Climate Action Legislative Working Group in the RI General Assembly. Before being elected in 2014, Aaron worked as a community organizer. He founded the Providence Student Union, a youth-led student organizing organization, and continues to work with youth in direct action advocacy campaigns.