For Kavanaugh’s LGBTQ Record, Read Between the Lines 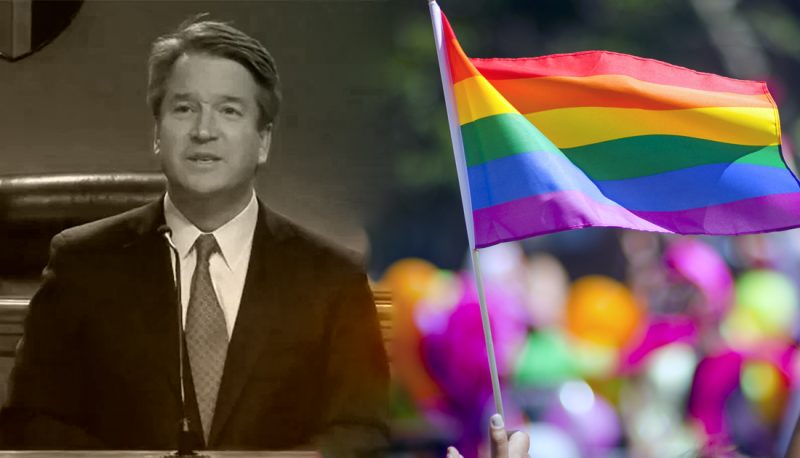 Since the July 9 announcement of Brett Kavanaugh’s nomination to the Supreme Court, progressive activists have sounded the alarm on his dangerous record on abortion, health care and other issues. Aside from passing President Trump’s anti-choice, anti-ACA litmus test, his judicial opinions on those issues make his ultra-conservative ideology self-evident—and we have every right to fear for the decisions he would issue in those areas.

Kavanaugh’s judicial record on LGBTQ rights is relatively sparse compared to what he’s already told us about his regressive views on reproductive rights and health care. But there are substantial reasons to worry that Kavanaugh will strip LGBTQ rights, the first of which, of course, is that reproductive rights and health care are LGBTQ issues. The LGBTQ community in particular relies on the Affordable Care Act for insurance that provides life-saving HIV/AIDS medications, and thousands of queer, transgender, non-binary and other LGBTQ folks rely on the reproductive rights guaranteed by Roe v. Wade. Especially as LGBTQ folks endure daily discrimination in their lives on a number of other fronts, we cannot afford to have such basic rights robbed from us.

Beyond those basic legal protections that we already know are endangered, Kavanaugh’s extreme record on employment discrimination, hijacking of “religion” to discriminate against third parties and privacy all make clear how  he would attack LGBTQ rights if he were confirmed. Like many of his far-right colleagues in the lower courts and the Supreme Court, Kavanaugh relies on using religion as a sword to strip Americans of their civil rights when they don’t align with his own principles. Over the last few years especially, we’ve seen the Supreme Court’s conservative justices use religion as grounds to rule against LGBTQ people and in favor of anti-LGBTQ business owners, adoption agencies, and more; it’s certainly no stretch to imagine that Kavanaugh might do the same on the Court.

It’s not just Kavanaugh’s judicial record that we need to consider. Prior to joining the D.C. Circuit Court, he served as President George W. Bush’s White House staff secretary. And just last week, Senate Judiciary Chairman Chuck Grassley conveniently omitted requesting the documents from Kavanaugh’s three-year tenure as “one of the president’s most trusted advisors.” It’s worth asking just what more those documents will reveal about Kavanaugh’s extreme ideology—particularly as they relate to Bush-endorsed attempts to enshrine anti-LGBTQ discrimination in the Constitution via the so-called “Federal Marriage Amendment” as well as attempts to thwart the Matthew Shepard and James Byrd Jr. Hate Crimes Prevention Act—and why the GOP is actively withholding that record from the American people as they push for Kavanaugh’s confirmation.

A quick scan of Kavanaugh’s supporters offers yet even more reason for concern. Among those advocates are anti-LGBTQ organizations like the Federalist Society, the Heritage Foundation, and the Family Research Council, all of whom have extensive histories in anti-LGBTQ activism. The Family Research Council, which claims that homosexuality is “harmful and unnatural,” has backed Kavanaugh since before his nomination to the D.C. Circuit Court of Appeals more than a decade ago; the Heritage Foundation, which has an extensive anti-LGBTQ record that includes targeting transgender-inclusive ACA protections and attacking LGBTQ-inclusive employment non-discrimination protections, is partially responsible for clinching his nomination to the Court. Kavanaugh may have successfully avoided public commentary about LGBTQ civil rights, but we don’t have to guess how he might lean from the litmus tests these organizations have imposed.

Ironically, Justice Anthony Kennedy, whom he would replace on the Court if confirmed, ruled in favor of the LGBTQ community’s dignity in landmark cases like Obergefell v. Hodges , Lawrence v. Texas and Windsor v. U.S. But Kavanaugh’s ideology and judicial record show how he might instead reify anti-LGBTQ legal discrimination by chipping away at the full spectrum of spousal, parental and other benefits that same-sex married couples enjoy.  Without those benefits, same-sex married couples will find themselves back in “skim-milk marriage” territory—and the LGBTQ community risks losing protections against discrimination in education, employment, health care and housing.

Kavanaugh’s advocates may try to claim that he’s a moderate Republican jurist, but the fact is that nothing could be further from the truth. His record shows no evidence that he will decide LGBTQ civil rights cases fairly. And his heavy reliance on the Religious Right’s recent redefinition of religious liberty as a sword to discriminate, his phalanx of extremist ideologue backers, and the refusal to disclose all of his relevant White House records to allow thorough vetting of his nomination are all red flags that senators would be foolish to ignore.  With a lifetime seat on the bench and a slew of LGBTQ cases already in the Supreme Court pipeline, Brett Kavanaugh has the potential to create lasting damage for LGBTQ people for entire generations.

The LGBTQ community has made gains thanks in part to Justice Kennedy’s visionary leadership on the bench. But daily discrimination is still pervasive and common, and if Kavanaugh rolls back the clock on civil rights, their safety, security and wellbeing would be immeasurably imperiled.  We can’t afford to go back to a time when LGBTQ people’s very existence is not legally recognized. It’s time to demand a justice who would uphold our rights, not dismantle them.