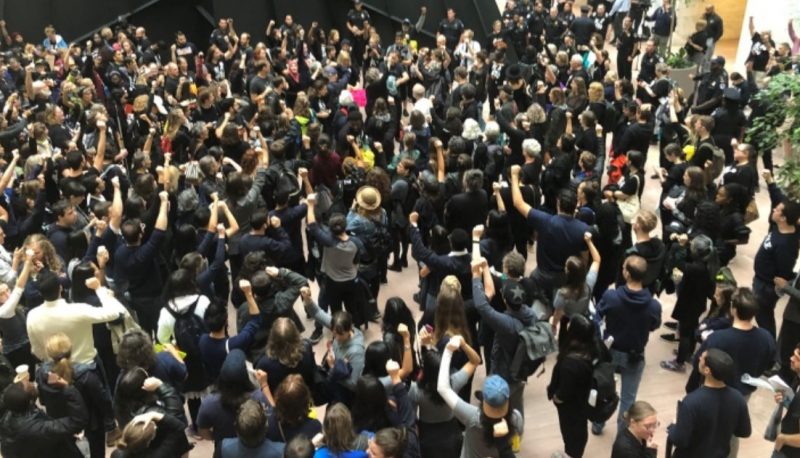 On September 24, People For the American Way joined organizers from the Women’s March and a coalition of activists in a peaceful protest against Brett Kavanaugh’s Supreme Court nomination. This rally came in response to the outcry from many women’s rights groups in light of the allegations against Kavanaugh made by Dr. Christine Blasey Ford and Deborah Ramirez.

The protest took place in the Hart Senate Office Building and later in front of the Supreme Court. In addition to the Women’s March and PFAW, some of the organizing groups included the National Women’s Law Center, Planned Parenthood Action Fund, and NARAL, along with a number of individuals who flew in from all over the country to protest the prospect of confirming Judge Kavanaugh to the Supreme Court bench.

Hundreds gathered in the Hart atrium of the Senate Hart Building around 10:00 a.m., mostly wearing black. Linda Sarsour, a well-known civil rights activists, was the first to stand up and give instructions. Because there were significantly more protestors than anticipated, she explained that things were a little complicated, but asked that everyone remain peaceful and closely follow the instructions of the organizers. Within moments, protestors received a warning from Capitol Police that they planned on arresting anyone who remained in the atrium due to the number of people who had gathered.

We support the @womensmarch and the incredible coalition of organizations who have gathered here to peacefully protest and demand justice. #StopKavanaugh #BelieveSurviviors pic.twitter.com/wS1PyO54AC

Led by Sarsour, the groups then left the atrium and split themselves among various senate offices. One of the biggest groups occupied the space outside the office of Senator Susan Collins Office, R-Maine, who has been a key player in the Kavanaugh nomination as a possible swing vote. Protestors erupted in chants such as “we will not go back” and “we believe survivors.” The protest remained peaceful throughout the chants, but due to the disruption about thirty-five protestors were arrested after about fifteen minutes.

Protestors then proceeded to visit the offices of several other senators including Jeff Flake, R-Ariz, and Ben Sasse, R-Neb., who have also been key to the narrative behind the Kavanaugh heari.ngs. Protestors again remained peaceful as they lined up on each side of the offices and allowed survivors of sexual assault to share their stories.

Happening Now: thousands in hall of congress – demand @JeffFlake vote not and #CancelKavanaugh. Women from across the country share their horror stories of sexual assault

The protestors returned to the Hart atrium around 12:30 pm and again quietly gathered in a circle around the organizers. After sharing a few more anecdotes and encouraging everyone to vote in November, organizers then instructed the crowd to leave the building and assemble in front of the Supreme Court as part of the “walkout and moment of solidarity” planned in support of Dr. Blasey Ford. Hundreds of groups and individual activists participated in this event all around the country to honor survivors of sexual assault.

As protestors left the Hart building, they remained silent with their fists raised, but then began chanting on the street “we believe survivors.” After marching to the Supreme Court, the crowd engaged in a moment of silence and raised their fists in solidarity. Multiple leaders of women’s rights organizations and survivors of sexual assault then came forward to give speeches about the importance of this seat on the Supreme Court and share personal stories.

Protestors are outside the Supreme Court. #StopKavanaugh #Kavanaugh #believesurvivors pic.twitter.com/7W9HGmJN8x

Some of the featured speakers included Fatima Goss Graves from the National Women’s Law Center, Tamika Mallory from the Women’s March, and Kyla Wright, a student activist. One of the most compelling speakers was Harper Jean Tobin from the National Center for Transgender Equality. She explained that nearly one half of all transgendered individuals have been or will be assaulted at some point in their lives, and stated that this number will only increase if LGBTQ rights are repealed by Justices on the Court. “So many transgender people know what it means to struggle with the fear that summoning the courage to come forward could mean being put on trial yourself,” Tobin stated in her speech.

“So many transgender people know what it means to struggle with the fear that summoning the courage to come forward could mean being put on trial yourself.”–our own Harper Jean Tobin #BelieveSurvivors pic.twitter.com/dRKUj5CDAX

After several hours of speeches, the organizers encouraged everyone to return on Thursday for additional rallies and protests and to keep speaking out for Dr. Blasey Ford, Deborah Ramirez, and all of the survivors who are struggling this week in light of the allegations.