PFAW and Allies Rally Outside the Capitol to #StopKavanaugh 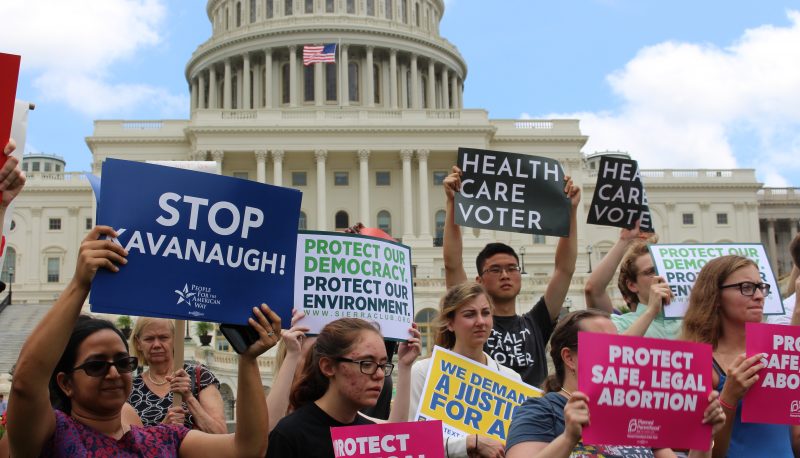 On August 1, People For the American Way and other civil and human rights organizations joined by a number of senators rallied together in front of the Capitol to voice their opposition to Trump Supreme Court nominee Brett Kavanaugh. PFAW, Alliance for Justice, the Center for American Progress, the Leadership Conference on Civil and Human Rights, Demand Justice, the Sierra Club, Planned Parenthood and others called on senators to protect our rights and reject Kavanaugh’s nomination.  If he were confirmed to a lifetime seat on the highest court in the country, Brett Kavanaugh would enable a dangerous and extreme agenda that would turn back the clock on important civil rights and other critical protections, including Americans’ right to affordable health care.

We are LIVE at the rally to stop the nomination of Brett Kavanaugh to the Supreme Court!Donald Trump has unleashed his latest and most dangerous attack on Americans' rights and access to safe, affordable health care with this nomination. NOW is the moment to stop Trump and the GOP!via act.tv

Senate Democratic Leader Chuck Schumer, D-N.Y., highlighted what’s at stake in this fight and emphasized that “this decision that will be made by the Senate and will affect the daily lives of average Americans for a generation.” He told the crowd that “we will not rest until Brett Kavanaugh is defeated and the American people win.”

.@SenSchumer: This is a moral issue affecting America. This is an issue we CANNOT lose. We will not rest until Brett Kavanaugh is defeated and the American people win. #StopKavanaugh #WhatsAtStake pic.twitter.com/dl1SleON06

Sen. Tom Carper, D-Del., underscored that Kavanaugh could shift the balance of the Court on critical environmental protection cases like 2007’s Massachusetts v. EPA. Sen. Kirsten Gillibrand, D-N.Y., reminded the crowd that Trump’s litmus test shows just how hostile Kavanaugh is to Roe v. Wade and the ACA, and said that “this is the moment where we have to stand tall for what we believe in.”

It's hard to have life, liberty and the pursuit of happiness if you don't have clean air.

We rallied together today to oppose Kavanaugh's #SCOTUS nomination and expose #whatsatstake for our environment. pic.twitter.com/GX5CWmPowd

“[Republicans] know [Kavanaugh] will be the ultimate trump card on the Supreme Court to roll back environmental protections, roll back civil rights laws and roll back protections for women,” stressed Sen. Ed Markey, D-Mass. “That’s why we have to stand up to say no to big oil, no to king coal, no to the Federalist society, no to the Koch brothers and no to Brett Kavanaugh serving on the Supreme Court of the United States.” Sen. Ron Wyden, D-Ore., called the crowd to action, saying Kavanaugh’s “extreme views are a threat to choice, they’re a threat to contraception and they’re a threat to all of our priorities for women in this country… let’s go to the grassroots, that’s where political change starts. We’re going to be with you every step of the way.”

Sen. Mazie Hirono, D-Hawaii, reminded the crowd of Kavanaugh’s dangerous views on executive power, saying, “We have a judge who may well say, ‘You know what Mr. President? You can pretty much do what you want with executive power.’” She reiterated Sen. Wyden’s call for grassroots organizing and said, “We are going to have to mobilize all across the country; we have to mobilize and we have to stay mobilized.”

.@SenBlumenthal: “For all the naysayers who say this is a done deal, you haven’t seen nothing yet. Because we are fired up. This is the fight for our lives.” #STOPKavanaugh #WhatsAtStake pic.twitter.com/XeQh5altil

Sens. Richard Blumenthal, D-Conn., and Jeff Merkley, D-Ore., called out the hypocrisy of Senate Judiciary Committee Chairman Chuck Grassley and Republican leadership for their steadfast refusal to request the documents from Kavanaugh’s tenure as White House staff secretary. Sen. Blumenthal highlighted Kavanaugh’s words from his 2006 hearing for the D.C. Circuit Court of Appeals, asking, “Why won’t they give us the documents from a period that Brett Kavanaugh said was one of the most ‘instructive’ and ‘formative’ in his whole life?” Sen. Merkley encouraged the crowd to keep pressuring their senators until “we get every single document that that man’s fingerprints have ever been on,” and he challenged his Republican colleagues, “How about we do our responsibility now and look at every single document that Kavanaugh has touched. Here’s what I want to know, what are the Republicans hiding?”

Ady Barkan, co-director of Be A Hero, called on the crowd to protect the rights of the most vulnerable Americans:

“When Congress ceases to protect us and begins violating our most basic rights, when it fails to protect us from the executive a couple miles down the street, we have a Supreme Court which is meant to step in and provide that backstop for democracy. We are at a pivotal moment in our nation. Never before in my life has our democracy been under such threat. Never before have we seen the executive rain down such hatred and violence against everyone who doesn’t look like the occupant of the oval office. It’s a shame because we have something so beautiful to protect.”

In 2017, @adybarkan confronted Sen. Flake on a plane telling him to #BeAHero and stop the corrupt GOP tax bill.

Today Ady continues to fight: “Never in our lifetime has our democracy been under such attack.”

PFAW has been working tirelessly to stop Trump’s unqualified and extreme far-right lower court nominees, and it will do the same for the Supreme Court. We will continuously bring our fight to Congress to make sure the Senate Judiciary Committee and all members of the Senate do the right thing and don’t rubber-stamp yet another dangerous Trump nominee.

78 of us got arrested to #StopKavanaugh — we are getting out of custody now and it’s clear that the nominee is afraid to face even a silent protest from hundreds of principled Americans who joined together today. https://t.co/TxWKQ98aX7