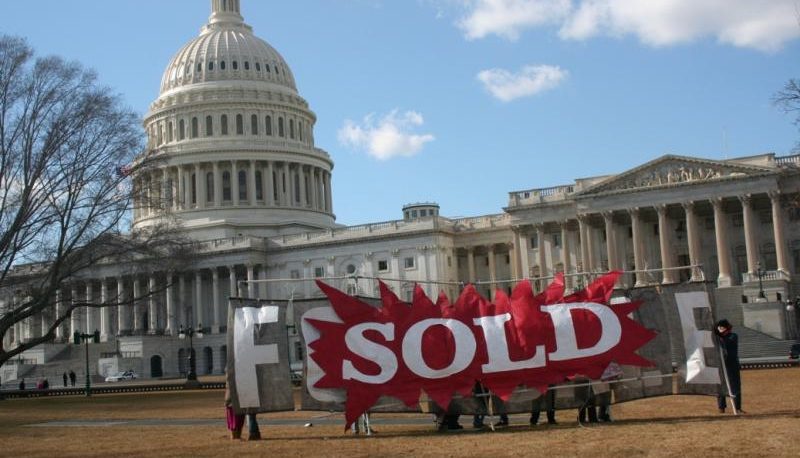 The Supreme Court ruling in Citizens United was one of the most devastating decisions in recent history, and further enabled the spread of big money in our politics to undermine our democracy. The amount of election spending has skyrocketed with more than $40 billion spent to influence the outcomes of federal and state elections. Most of that money comes from fewer than 1% of Americans, meaning the ultra-wealthy are the ones calling the shots and ultimately deciding to who makes it to office.

To combat this shift in power and work towards a fairer election system People For the American Way is working with a coalition of organizations to support H.J.Res 2, the Democracy For All Amendment. This constitutional amendment would protect the integrity of American elections and help secure equal rights for all citizens by addressing the problem of money in politics. Essentially, this would overturn Citizens United and related cases by putting the power to regulate the influence of money in politics back in the hands of the people. On May 22, PFAW joined American Promise, Take Back Our Republic, and others for a congressional staff briefing about H.J. Res. 2.

PFAW is on Capitol Hill for a special briefing to support the Democracy For All Amendment. If you want to get money out of politics, ask your Congressperson to support this amendment! #DemocracyForAll pic.twitter.com/bPO8hn17CA

The first speaker, Jeff Clements from American Promise, introduced the Democracy For All Amendment and provided some background on the amendment movement thus far. Next, a representative of Rep. Jon Katko, R-N.Y., who has been a lead sponsor this session, discussed how this has bipartisan appeal because of the seriousness of the problem, and its impact on the integrity of the entire political process.

Jen Herrick from People For the American Way presented data from United For The People demonstrating that there is broad, diverse support across the country. Since 2010, nearly 19 states and more than 800 towns and cities have supported a constitutional amendment to address the influence of big money in politics.

.@jenherrick1: “140 million Americans, 45% of the U.S population, live in a state or locality that have supported a constitutional amendment.” #DemocracyForAll #HJRes2 pic.twitter.com/4vEnuKm7G8

Finally, Francis Johnson from Take Back Our Republic and former New Hampshire State Senator Jim Rubens went into more detail about conservative pushback to Citizens United and why conservatives should support H.J.Res. 2.

Francis Johnson from @takebackorg: “We need to get the dark money out of politics. It stifles free speech.” #DemocracyForAll #HJRes2 pic.twitter.com/jwnNXVPePa

The effort to amend the Constitution is rightly a long and difficult process, but it has been done numerous times before in our country’s history (this would be the 28th amendment). People For the American Way is proud to be part of the nationwide movement that is growing in support of the Democracy For All Amendment, and we continue to work with our partners to build support in Congress.