After Mateer and Talley, Unacceptable Nominees Remain - People For the American Way
Skip to main content 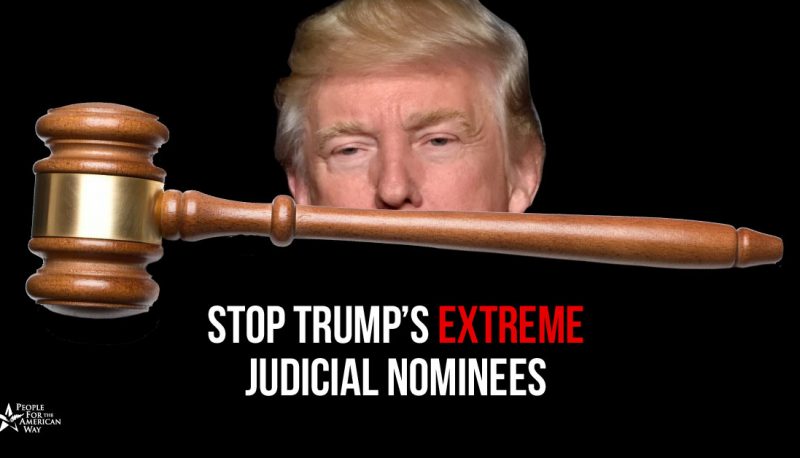 The White House was right to withdraw the nominations of Brett Talley and Jeff Mateer to be district court judges. But their withdrawal does not mean that everyone else is acceptable. Other judicial nominees don’t get a pass just because they haven’t been caught on video calling trans kids satanic, or didn’t disclose that their marriage creates an enormous conflict of interest.

Make no mistake: Talley and Mateer are far from being the only spectacularly unqualified Trump judicial nominees currently under Senate consideration. In addition to Kyle Duncan and David Stras at the circuit level, several other district court nominees immediately come to mind, such as:

Each of these nominees is scandalously unqualified for lifetime tenure on the federal bench.

Let’s start with Matthew Kacsmaryk, deputy general counsel at the stridently anti-LGBTQ and anti-choice First Liberty Institute (where Mateer was general counsel). He is essentially a clone of Mateer, without the video. He has opposed extending anti-discrimination protection to LGBTQ people in areas including labor rights, hospital patient rights, fair housing, and programs helping women under the Violence Against Women Act.

He works to transform religious liberty from a protective shield into a sword to harm others. In articles about the law that he has authored, he uses quotation marks around terms like “sexual orientation” and “gender identity,” as if they are made-up concepts with no bearing on reality. His contempt for LGBTQ people goes so far that he uses quotation marks around the word marriage when used for same-sex couples, and even with the term LGBT. He has written that abortion rights and LGBTQ rights are based on:

Kacsmaryk rejects the idea that the Fourteenth Amendment protects the right to abortion, the right to use contraception, and apparently the fundamental premise that it protects privacy at all. His legal views of privacy issues and LGBTQ equality (and even dignity) are at odds with the law and seem shaped by his personal views.

Kacsmaryk is hardly alone among pending Trump nominees in his animus against LGBTQ people. Damien Schiff, nominee for the Court of Federal Claims, opposed an anti-bullying program in an article entitled “Teaching Gayness.” As he told senators, he defined it as teaching about “the morality of physical intimacy by persons of the same sex.” He criticized portions of the anti-bullying program that presented what he called the “homosexual lifestyle,” telling senators he meant “the desire to engage in, and the engaging in, physically intimate activity with a person of the same sex.”

He has written of his desire for a far-right Supreme Court that could “overturn precedents upon which many of the unconstitutional excrescences of the New Deal and Great Society eras depend.” And he has called Justice Anthony Kennedy a “judicial prostitute.”

Then there’s Matthew Petersen, who has been nominated to preside over district court litigation in Washington, DC. But he doesn’t have experience actually litigating cases in courts, federal or state. Nor does he have any experience serving as a judge at the state or local level. In his Judiciary Committee questionnaire, he admits that he has “not had occasion to appear in court” and has no experience “in court or directly litigating cases.”

At Petersen’s December 13 hearing, Sen. John Kennedy of Louisiana asked a withering series of questions that would not have fazed a district court nominee before the Trump era. He went through a checklist of some of the most basic things a trial judge should know, drawing a blank (or an attempt to dissemble) from the nominee. Petersen knows nothing about the basics of the job, and he wants the Senate to give it to him anyway—with lifetime tenure, to boot. He and the president who nominated him must have a pretty low opinion of the United States Senate to think it would confirm him.

So, too, must North Carolina Eastern District nominee Thomas Farr, who—after party-line committee approval—was exposed as having likely lied to the senators about his participation in a notorious voter intimidation campaign in 1990 by then-Sen. Jesse Helms. The campaign sent 100,000 postcards to African-American voters, suggesting they weren’t eligible to vote and could be prosecuted if they tried. The Justice Department sued the campaign, which was represented by Farr. But the nominee assured the Judiciary Committee that he had not known about the scheme and had not been present when it was being planned.

Unfortunately for Farr—but fortunately for the U.S. Senate—a former DOJ attorney involved in the investigation remembers that Farr had in fact been in on the planning weeks before the cards were sent. Gerald Hebert has revealed his contemporaneous notes and identifies Farr as being part of the voter intimidation scheme. Despite requests from Democrats and progressive activists, Farr has not been called back to the committee to answer questions about the newly uncovered evidence. If Republicans have any concern for what is left of the Senate’s dignity, they will not rubber-stamp Farr and give him a lifetime appointment to a federal court.

Across the border in Tennessee is Mark Norris, nominee for the Western District. Norris has used his power and influence as Senate Majority Leader to deprive targeted communities of their rights. LGBTQ Tennesseans are well aware of Norris’ animus toward them. After the Obergefell marriage equality decision, he went so far as to intervene in a lesbian couple’s divorce to urge the judge not to treat them the same as an opposite-sex couple. Unintimidated, the judge rebuked Norris and his colleagues for their attempt to bypass the separation of powers.

Nor are LGBTQ people his only targets. When Memphis changed the name of three parks so they would no longer honor the Confederacy or the founder of the KKK, Norris supported a law to make it far more difficult to remove Confederate names and statues from public spaces. When already-vetted Syrian refugees came to America, Norris led an effort to keep them out of Tennessee, an effort that included posting online material linking the mostly Muslim refugees to ISIS terrorists.

Kacsmaryk, Schiff, Petersen, Farr, and Norris are all currently under consideration by the Senate for lifetime appointments to federal district courts. Their records are just as disqualifying today as they were a week ago, before Jeff Mateer and Brett Talley’s nominations were withdrawn.