12 Months of Trump: 12 Attacks on the American Way 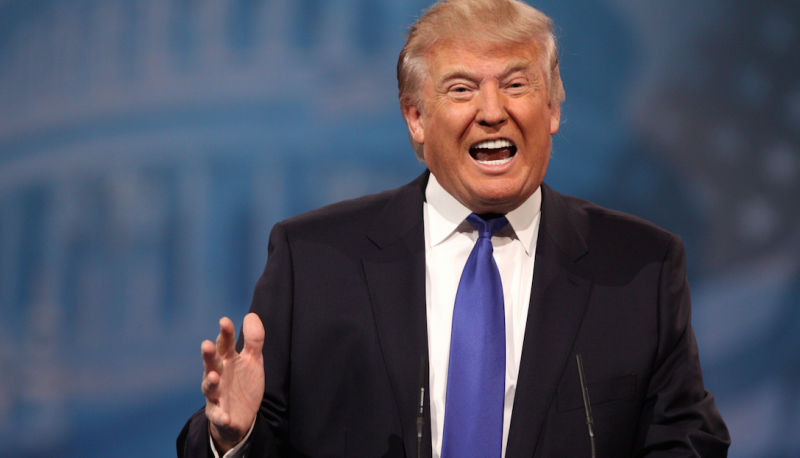 On January 20, 2017, Donald Trump was sworn in as the president of the United States. The resistance has claimed significant victories since then, including sweeping the elections in November, stopping extremist judicial nominees, and signing up millions for Obamacare. But as we look back on year one, we can’t ignore what has happened. Trump has still done a huge amount of damage to the very fabric of our democracy and to civil rights. We must stay vigilant.

In January, as one of his first actions in office, Trump announced that he was bringing back the global gag rule, which bars foreign nongovernmental organizations (NGOs) from receiving any U.S. funds if they offer abortion services, counseling, advocacy or even referrals, with expanded restrictions. This month he became the first sitting president to address the annual March for Life as his administration attempts to roll back the birth control rule in the Affordable Care Act and HHS continues its efforts to block undocumented immigrant girls in their custody from getting abortions. And his anti-woman agenda expands far beyond women’s reproductive rights.

2. Attacks on people of color

During his campaign Trump called Mexicans rapists and criminals. He stacked his White House staff with people with strong ties to the Alt-Right and all but condoned the violent white supremacists who descended on Charlottesville. He has forcefully come out against the peaceful demonstrations ofBlack athletes even demanding that the NFL do more to tamp down the athletes’ voices. Many of Trump’s actions, from the Muslim bans to racist judicial nominees, have been steeped in racial animosity. Trump’s administration has continuously threatened HIV/AIDS prevention funding that helps save millions of—mostly black and brown—lives at home and abroad.

3. Attacks on religious liberty for all

In October, U.S. Attorney General Jeff Sessions released guidance on how the federal government should interpret and apply the First Amendment and the Religious Freedom Restoration Act (RFRA) to federal government programs. The message was clear: Women, people who are LGBTQ and many other marginalized communities have few legal rights that their antagonists need to respect. In January, he doubled down on that idea when the Office of Civil Rights (OCR) of the Department of Health and Human Services (HHS) announced its “Conscience and Religious Freedom Division” that appears poised to support health care workers who cite religious beliefs to deny patients medical care. We’re still waiting to see how this plays out in practice and in the courts, but the Trump administration’s misconception of religious liberty as a tool to harm others is crystal clear.

In a critical Supreme Court case, Husted v APRI, Trump’s DOJ switched sides to support the practice aggressively purging of voters from Ohio’s voting rolls. Trump teamed up with Kansas Secretary of State Kris Kobach, a champion of voter suppression, who he named to the head of his voter suppression commission. While the commission has disbanded, we expect to see more from Trump and his voter suppression allies this year. After all, Trump believes the only reason he lost the popular vote is because of millions of “illegal” votes—a claim he has no evidence to support.

5. Attacks on immigrants from around the world

From early on in his campaign, Trump has shown disdain for immigrants firing up his base and likely helping him to win the election. As a government shutdown looms over the future of Dreamers, among other critical human needs issues, Trump is still facing backlash over his racist comments about El Salvador, Haiti, and Africa. The comments were made during negotiations with Congress over the future of DAPA, DACA, and TPS recipients—by rescinding these orders, Trump has effectively made it so that millions of immigrants are losing their legal status after years or even decades of living in the U.S. legally. Trump’s Muslim bans were created to discriminate against immigrants. In line with his rallying cry to build a wall along the Mexican border, his administration has been threatening sanctuary cities whiletargeting immigrants in those cities.

6. Attacks on the Supreme Court

The effects of Trump’s nomination of ideologue Neil Gorsuch to the Supreme Court that was stolen from President Obama will be felt for decades. He chose a far-right judge hand-picked by right-wing interest groups rather than a consensus nominee. The only way to ram through a nominee like Gorsuch was to blow up Senate rules andevery Republican without exception got in line to do so: Every time the Supreme Court issues a5-4 decision attacking women’s rights, undermining LGBTQ equality, allowing Wall Street to scam consumers, eviscerating civil rights protections and giving billionaires more power in our democracy, there will be no question where the blame will fall.

7. Attacks on our lower courts

Donald Trump has been trying to ram through as many glaringly narrow-minded judicial nominees as he possibly can. At least three potential judges—Brett Talley, Jeff Mateer and Matthew Petersen—have been stopped in the nomination process due to their lack of qualifications and extreme records. But many far worse ones are in the pipeline or already on the bench. By swinging the courts to the far-right, he is seeing to it that his extreme agenda can be pushed through for years.

When Trump supported Alabama Senate candidate Roy Moore, who has been accused by at least six women of pursuing relationships with them when they were under 18, he stood with an alleged sexual abuser in the face of the growing #MeToo campaign. From a president with such a long history of abusing women, it’s not surprising, but in this moment of cultural reckoning, it cannot go unrecognized.

It seems according to Trump and his staff, that any news that isn’t pro-Trump news is “fake news.” It’s no secret that Trump loves attacking the media, but his campaign against America’s free press goes deeper than words: He has vowed to “open up our libel laws” to make it easier to sue journalists. Trump’s constant refrains of “fake news” and verbal assaults on the media are empowering those within the U.S. who want to restrict the freedom of the press and discredit journalists.

One of the Trump administration’s first big moves was to rollback civil rights protections for transgender students that helped secure access to bathrooms and other school services and facilities based on their gender identity. In July, Trump announced on Twitter that he would be banning trans people from the military. Trans people are enlisting while the order is being fought in court.

Education Secretary Betsy DeVos has been one of the leading figures in a decades-long campaign by Religious Right leaders and anti-government ideologues to divert public education funds into private religious schools and replace public education with a profit-maximizing marketplace model. Her nomination to head the Department of Education was deeply troubling. Expanding anti-public education efforts, like “school choice” remains a priority for DeVos. DeVos has also rescinded Obama-era campus sexual violence guidance, while DOJ has signaled a new effort trying to undermine programs to promoting diversity on our nation’s college campuses.

Over the course of the year, Trump has used conspiracy theories and tweets to try and distract from developments in the investigation into potential collusion between his campaign and the Russian government. He fired FBI Director James Comey because of the investigation, railed against Jeff Sessions for not protecting him from the investigation, and recently Trump’s attacks on this independent investigation have ramped up again. That hasn’t stopped Special Counsel Mueller from pursuing the investigation, and he has already charged former White House national security adviser Michael Flynn, former campaign chairman Paul Manafort and his deputy Rick Gates, and Trump campaign foreign policy adviser George Papadopoulos. But efforts continue to try to undermine his work, which is why it is so important to support legislation to protect him and his investigation.

We must hold Trump accountable for his ongoing attacks—and that’s exactly what we’re planning to doing in the elections this fall. What issues motivate you to fight back?